Will the bastardization of science never end?

No doubt you have heard some abortion advocates oppose initiatives to define human personhood as beginning at the moment of conception by claiming that such legislation would give human rights to an egg – nevermind the fact that that egg must be fertilized by a human sperm, in which case it completely ceases to be an egg. You will also recall that last week I mentioned that a court in South Korea has ruled that that human embryos left over from fertility treatment are not life forms and can be used for research or destroyed. 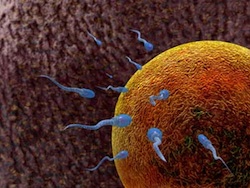 None of this is new, of course. Abortion rights advocates have been denying that the unborn is human life for decades now. And we’ve been defending science and nature (not to mention the precious lives of our unborn brothers and sisters) for just as long. We know that human life begins at conception/fertilization and abortion/ESCR advocates really only deny the fact for political and not scientific reasons. But we can always use a little Fertilization 101 refresher. From Patrick Lee and Robert P. George at National Review Online:

In normal fertilization, many sperm penetrate the corona radiata of the ovum (a layer of follicle cells surrounding the ovum). Then, typically only one sperm will penetrate the zona pellucida (a film of glycoproteins surrounding the oocyte) and reach the oocyte. The sperm’s membrane then fuses with the actual membrane of the oocyte. This fusion triggers changes in the oocyte (or rather, what was the oocyte) so that (a) the membrane of this new cell undergoes a rapid polarization, and (b) a calcium wave is produced throughout the new cell’s cytoplasm so that the zona pellucida hardens over approximately 30 minutes and repels penetration by sperm. These facts indicate that what is living at this point is not an ovum.

With the fusion of the sperm and the ovum, the tail of the sperm is lost, and the membrane surrounding the head of what was the sperm joins the surface membrane of the former oocyte, creating a single, continuous membrane. This allows cytoplasmic factors derived from the ovum to affect the nuclear contents derived from the sperm — for example, new types of histones begin to be associated with those chromosomes, modifying the behavior and interaction of the molecules in these chromosomes. This shows that the sperm has ceased to be.

At this point, the genetic material from the ovum (the female pronucleus) and the genetic material from the sperm (the male pronucleus) are both contained within a single new cell, are being moved toward each other, and will eventually intermingle. This is the point just after the fusion of the membranes of the sperm and the ovum, when the ovum and the sperm cease to be, and a new organism — a whole human organism — comes to be. Could the sperm still be retrieved from inside the ovum? No, because the sperm no longer exists. At best, the male pronucleus could be extracted from the zygote (the new, one-celled organism). The result would not be a sperm and an ovum, but only nuclear material from a zygote on the one hand, and a disabled embryo (or perhaps the death of the embryo) on the other.

Read the whole thing, which is a response to a student’s assertion that it is possible to extract the sperm after fertilization. For further reading, check out Prof. George’s book Embryo: A Defense of Human Life on the nature and rights of human embryos.

—————
P.S. Is it bad that talking about fertilization automatically makes me think about the opening scene from Look Who’s Talking? I could only find a clip of it in spanish. Happy Friday – enjoy! 😉