Excellent! France has awarded its Legion of Honor to a woman who has been a locked-in quadriplegic for 30 years (h/t Wesley Smith). And, get this: it’s for her fight against euthanasia and assisted suicide! 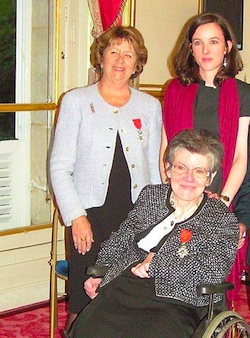 Maryannick Pavageau (shown here with her daughter Myriam (r) and Senator Monique Papon (l), who bestowed the award) had a stroke which left her completely paralyzed at the age of 29. “When I discovered the state I was in, it never occurred to me to ask ‘why me?’” she says. “Instead, I said, ‘what’s next?’” Mme Pavageau is a member of the Association of Locked-in Syndrome (ALIS) and contributed to the 2008 Leonetti commission report about euthanasia in France in which she said:

“Every painful situation calls for respect but is just saying that enough when people cry for help? We must refine the meaning of words, step back, and not get caught up in waves of emotion. Let us distinguish between what is presented as a gesture of love and what is actually a great cry and desperate quest for love…

“The time has certainly come for associations which defend the weak to join the current debate and unequivocally affirm that everyone, regardless of his handicap, his accident, his discouragement, retains a place in society and that there are no limits to human dignity.

“I confess that sometimes I feel discouraged. I get completely fed up.

“But as a response to our deep discouragement, are we only entitled to what is hypocritically called the ultimate ‘act of love’? I fully recognize that our situation can sometimes be difficult. Even if there is relief for physical pain, there is the mental suffering. but you can hang on, you’re not alone. We must keep up out hope, if only in the progress of science.
…

“All life is worth living…It can be beautiful, regardless of the state we are in. And change is always possible. That is the message of hope that I wish to convey. I am firmly against euthanasia because it is not physical suffering that guides the desire to die but a moment of discouragement, feeling like a burden… All those who ask to die are mostly looking for love.” (via MercatorNet)

I don’t know about you, but I always grew up with the understanding that an expression of suicidal thoughts was a “call for help”, a sign that that person was lonely and afraid – looking for love. Though that person thought their life was unbearable, suicide was not the answer to such pain. For the most part we still consider suicide and unacceptable answer to pain and suffering and want to prevent it when possible, but not so much when the suicidal person suffers from some serious physical disability. In fact, then we actually advocate for the right to that person to end their life and even have help doing so! Why? Is it just about respecting someones personal “choice”?

Perhaps in part, but I would submit that, for all the great strides we have made in recent decades helping people with disabilities to become more active and involved in our communities and work-forces, we, as a society, have not yet relieved the general assumption that life with a disability or a sick loved one really is unbearable or less fulfilling. Indeed, in a poll last year, 52% of the people in our country admit that that they, themselves, would rather be dead than disabled. Not only do we advocate for sick and disabled people to have access to assisted suicide services, we also accept the murder of unborn children diagnosed with fetal abnormalities, and allow, even encourage, family members to starve their severely handicapped loved ones.

Of course it is never “good” for anyone to be sick or live with terrible disabilities and incurable diseases, but suffering is not beneath our dignity as human beings, killing is. Every human life, even when it is subject to pain, is infinitely blessed and valuable and worth living. Sick and disabled people do not need help to die – they need help to live, to understand the inestimable value of their own life and their ability to pursue happiness despite the tragedy of their current situation. Sometimes that’s as easy as just being surrounded by positive people and sometimes the suffering individual needs a good amount of professional counseling, but under no circumstances should we ever give up on life.

It is also worth noting that accepting the premise that some life is not worth living can and certainly has lead to justifying the termination of others. As much as we condemn the Nazi Holocaust it doesn’t appear that we have learned a whole lot from it. Despite popular belief (and, yes, I have talked to people who actually thought this), the Holocaust did not begin with the extermination of the Jews, but the sick and disabled and it was inspired by a pre-existing eugenics movement that advocated the destruction of Life Unworthy of Life.

One Comment on “Locked-In Quadriplegic: “All Life is Worth Living””