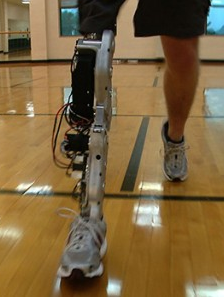 In the last episode of BioTalk, Rebecca Taylor and I talked all about transhumanism. Admittedly, it was probably the most “sci-fi-ish” sounding of all the pro-life 3.0 issues, but lest any of you consider some of our claims to be too outlandish to be taken seriously — specifically, the idea of people amputating perfectly healthy limbs and replacing them with “super-human” bionic ones — consider this article from MATTER.

The main focus is on a man named “David” who suffers from Body Integrity Identity Disorder (BIID), also known as “amputee wannabe,” and recently went to China to have one of his legs amputated.

In Patrick’s house, I saw a decorative skeleton hanging off a chandelier and didn’t think much of it. “Look more closely,” he urged. Only then did I notice that it, like Patrick, was missing part of a leg and part of one finger. Then there was a statue of Michelangelo’s David on the mantelpiece. It too was missing part of a leg. The family had acknowledged Patrick’s suffering and was celebrating his freedom from BIID. Patrick now seemed genuinely comfortable with his body.
…
A YEAR OR SO before Patrick’s operation, a psychologist asked him if he would take a pill to make his BIID go away, should such a treatment exist. It took a moment for him to reflect and answer: maybe when he had been a lot younger, but not anymore. “This has become the core of who and what I am,” he said. This is who I am. Everyone with BIID that I have interviewed or heard about uses some variation on those words to describe their condition. When they envision themselves whole and complete, that image does not include parts of their limbs. “It seems like my body stops mid-thigh of my right leg,” Furth told the makers of a 2000 BBC documentary, Complete Obsession. “The rest is not me.

Read the whole thing. Very bizarre and also very sad. As Wesley Smith notes, these days we often don’t treat mental illnesses, but instead, tend toward acceding to and normalizing them. The article doesn’t talk about these amputee wannabes getting bionic legs or anything, but make no mistake, besides medical and science journals like this one, the normalization of BIID is largely being pushed by the transhumanist movement.