As I predicted, turnout for Tuesday’s religious freedom rally here in MO was huge. What is surprising, however, is the fact that the media has actually been reporting turnout numbers fairly. I’m terrible at crowd guessing. Most of the people I talked to there estimated that there was somewhere between 2,000-3,000 people there. Given how the media completely ignores the hundreds of thousands of pro-lifers who March in D.C. every year, I was pretty shocked to see several mainstream newspapers report on the ‘thousands’ what were ‘crammed into the Capitol.’ What’s even more impressive is the fact that not only did they run incredible crowd shots like the ones below…on their front pages…above the fold, but we actually managed to get more press than the large gathering of labor union workers who were also there and were being addressed by the Governor.

From the Jefferson City News Tribune: 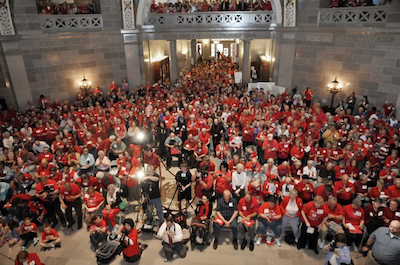 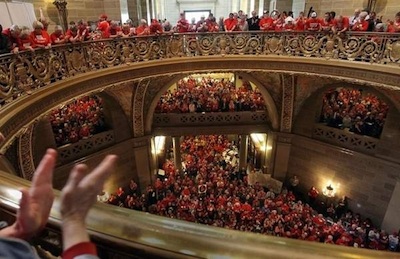 All of the rally speakers were impassioned and forceful. But, to me, the best address came from Archbishop Robert Carlson (see video), who touched on something that I have thought about often as this debate has been raging:

The bottom line is this: the government has left us no good options. We cannot, in good faith, comply with the mandate as written. Every avenue compromises our mission, and forces us to render unto Caesar what belongs to God. 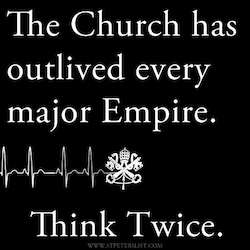 So what should we do? Thankfully, we have a roadmap, because we’ve been here before! If you think about it, our situation is just like that of the early Christians living in the heyday of the Roman Empire. For the first three centuries of our Christianity, Roman culture and law provided a climate that was not particularly friendly to the Church, and was openly hostile to it at certain points.

How did the early Church survive and thrive in a hostile culture? How did it come to pass that the Church is still a living reality, but the Roman Empire only lives in history books?

It was the witness, the witness of believers like you and me.
…
We understand the words, Good News as Jesus spoke them in the scriptures and we bear witness to that Gospel. We will represent the Lord in the public square. Mr. Obama, we stand as followers of Jesus Christ.

Just in case those in Washington have forgotten, let me share the words of Our Lord, “He summoned the crowd with his disciples and said to them:, Whoever wishes to come after me must deny himself, take up his cross, and follow me” (Mk 8:34; Mt 16:24; Lk 9: 23) and we are ready to march!
…
[W]e understand at our root belief of faith that it is the Cross that we are invited to carry.
…
My brothers and sisters, will you stand with me and say‚ ‘Jesus, I will take up my cross and follow You wherever the path takes us?”

Mr. Obama, you should know that we are ready to suffer for our convictions. You can fine us and we won’t pay. You can put me in jail; I don’t care. But we will remain committed to the end of what our Lord has taught us and what he has called us to do as his witnesses and disciples. We have been here before. Remember Rome, Mr. Obama. Remember Rome.

Yes. Let’s all remember Rome. Let’s stand up against our oppressors, keeping in mind that this is not the first time we’ve had to to do so, and it will not be the last. Christ himself told us that we will always be hated and persecuted as long as we follow Him. This is what we signed up for. The Good News is that we know that we know how this story ends. That is the Victory we are preparing to celebrate in just a few weeks. So, no matter how bad things get, we must always rejoice in hope, endure in affliction and persevere in prayer (Rom. 12:12).

Things here in the West are not (yet) as bad as they were in ancient Rome, but, like the early Church, the Church today needs people who are willing to make sacrifices so that the truth of the Gospel can be heard, our culture challenged, and our world transformed (from Abp. Carlson’s prepared remarks). It’s not easy, but we are not alone (Mt. 28:20). Let’s pray that we are up to the challenge.

I urge you therefore, brothers and sisters, by the mercies of God, to offer your bodies as a living sacrifice, holy and pleasing to God, your spiritual worship. Do not conform yourselves to this age but be transformed by the renewal of your mind, that you may discern what is the will of God, what is good and pleasing and perfect. (Romans 12:1-2)

On that note: let’s all remember to also pray for our brothers and sisters in the East and the Middle East, who, like the early Christians, really are paying for their faith with their lives.