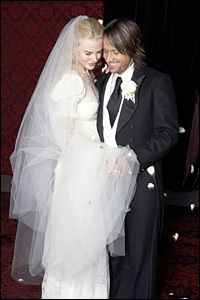 On my post this week about Nicole Kidman’s new baby via “gestational carrier” a reader reminded me that Kidman is Catholic. She and husband Keith Urban are married in the Church, their first daughter is baptized Catholic and according to this Catholic News Service article she once told the Philippine Daily Enquirer, “Catholicism guides me. I certainly have a strong belief. I try to go to church regularly, and I try to go to confession.” Well, obviously she didn’t seek the guidance of her faith when she decided to have a child manufactured and carried in another woman’s womb (one could say the same about some of her movie role decisions as well). Hattip to The New View on Sex for pulling out the appropriate sections of the Catechism of the Catholic Church on IVF and surrogacy:

“Techniques that entail the dissociation of husband and wife, by the intrusion of a person other than the couple (donation of sperm or ovum, surrogate uterus), are gravely immoral. These techniques (heterologous artificial insemination and fertilization) infringe the child’s right to be born of a father and mother known to him and bound to each other by marriage. They betray the spouses’ “right to become a father and a mother only through each other.” (CCC 2376)

“They dissociate the sexual act from the procreative act. The act which brings the child into existence is no longer an act by which two persons give themselves to one another, but one that “entrusts the life and identity of the embryo into the power of doctors and biologists and establishes the domination of technology over the origin and destiny of the human person. Such a relationship of domination is in itself contrary to the dignity and equality that must be common to parents and children.” (CCC 2377)

“A child is not something owed to one, but is a gift. The “supreme gift of marriage” is a human person. A child may not be considered a piece of property, an idea to which an alleged “right to a child” would lead.” (CCC 2378)