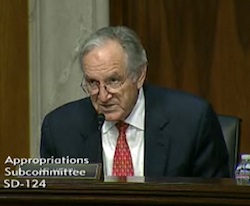 Yesterday morning, Sen. Tom Harkin, chair of the Labor and Health and Human Services Appropriations Subcommittee, held a hearing on federal embryonic stem cell research funding. This was prompted by an injunction by District Court Judge Royce Lamberth’s injunction that blocked the Obama Administration’s expansion of federal funding for ESCR. I watched nearly the whole thing (here). Nothing new, really. The testimony was about 4 to 1 in favor of federal ESCR funding. Scientists in favor of ESCR pleaded for more federal financial support, talked about the “promise” of ESCR, but provided little to no evidence to back their claims.

I did want to comment on one thing, though. In his opening remarks, Sen. Harkin told the committee that the hearing was gong to “stick to the science” and focus on the “promise” of embryonic stem cell research, not raise any questions about the merits of Judge Lamberth’s injunction against funding ESCR based on his interpretation of the Dickey-Wicker Amendment (odd, considering that was the reason for the hearing in the first place). However, as Sen. Roger Wicker (the same Wicker of the Dickey-Wicker Amendment) correctly pointed out in his opening statement, whatever science has to say about it, “this debate involves profound ethical and moral questions.” The ethical questions raised by ESCR cannot be separated from the debate. In fact, they should be the primary consideration, especially when determining whether or not the government should fund such research. He went on:

The Federal Government, therefore, says Wicker, should NOT be involved in subsidizing this controversial research with taxpayer dollars, whether science tells us it has “promise” or not (and 57% of the taxpayers agree!).

Disagreeing with this, several of the ESCR supporters insisted that research decisions should be up to scientists, not politicians or the general public for that matter. A familiar argument in the ESCR debate. But science and scientists alone do not have all the answers. Sure, they can tremendously improve our lives with some of their discoveries, but only with proper ethical oversight. Science is only capable of telling us what can be done, not what should be done. And, excuse me, but I think we the people have a right to say where we want our tax dollars to go, even if we’re not scientists! There are limited funds available for health related research and just because something’s legal, doesn’t mean that it must be funded by the Federal Government.

I have to go with Rebecca Taylor on this one:

I have been told that I need to respect the opinion that human embryos are just a mere clump of cells and full of promise for cures. Well, respect is a two way street. If you want embryonic stem cell research, then you pay for it.

Don’t make me, and millions of people like me who find research that relies on the destruction of human embryos morally reprehensible, support it with our tax dollars. When you do, you are forcing your belief that a human embryo has no value on me.

Ultimately no action was made as a result of Thursday’s hearing. In fact, we probably won’t see any Congressional action regarding stem cell research funding at least while the matter is under appeal. Said Harkin:

If we don’t win this battle in the courts, we’ll have to take it up in Congress

It sounds like they’re going to wait and see how this is resolved in the courts first, but that doesn’t mean that we’re in the clear. Rep. Dianna DeGette is still furiously promoting her pro-cloning ESCR funding bill – which is co-sponsored by Republican Rep. Mike Castle who recently lost the GOP primary nomination for Senate in Delaware. And Sen. Arlen Specter, who was also defeated in his primary and is now serving the remainder of what is (thankfully!) his final term as well, introduced a similar bill in the Senate. Depending on how long the appeals process takes and what the final outcome is, there could still be time to get some of this legislation through before a (hopefully) less ESCR friendly Congress takes over next year. Jill Stanek has more details on what this all means for pro-lifers and who needs to be contacted in the meantime.

One Comment on “ESCR Funding: it’s Primarily About Ethics, not Science”