A few weeks ago I posted a video of Millie Fontana, a donor-conceived daughter of lesbian mothers. In her speech, Fontana touched on the imbalance of “equality” in the LGBT debate.

Indeed, “equality” is the buzz word for this debate. Marriage equality. Family equality. Of treating people with equal respect for who they are as human beings.

But what about the men, women and children involved in achieving this “equality”? To make a family with children even partially biologically related to them, same-sex couples must use third-party reproduction.

Even the children conceived through this technology often recognize this fact, themselves.

According to the 2010 study “My Daddy’s Name is Donor“, the first real effort to learn about the identity, kinship, well-being, and social justice experiences of young adults who were conceived through sperm donation, 45% of children conceived from an anonymous sperm donation reported that they were bothered by the fact that money was exchanged in order to conceive them.

“As much as I do believe that surrogacy can come from a compassionate place… as a product of surrogacy, it’s hard not to be aware of the fact that there is a price tag. There is an awareness that, you know, in essence, you were bought by the family that you grew up with. You are a product at the end of the day.”

Alana Newman is another outspoken donor-conceived woman and founder of Anonymous Us, a support group for the children of anonymous sperm donors. Earlier this year she and another donor-conceived woman co-authored an article supporting fashion designers Dolce and Gabbana for criticizing artificial reproduction:

I am indeed a human being. My liver, heart, hair, and enzymes all work the same. I’ve discovered it is my psychology that is different and not-quite-right, due to my conception. It’s not a matter for doctors to fix; it’s a spiritual problem. My father accepted money, and promised to have nothing to do with me. My mother was wonderful and I have always loved her deeply, as she has loved me. But my journey is a battle against the void left by my father’s absence, and a particular disability in understanding the difference between sacred and commercial, exploitation and cooperation. Those torments for me far outweigh any social stigma or momentarily painful gossip I’ve endured from ignorant people.

Even with the best intentions, taking the creation of life out of its natural, God-given context and moving it into the science lab seriously alters how many view the wonder and mystery of new life and how that new life should be treated.

Nowhere is this more evident than in India where surrogacy has become full-scale human trafficking with babies literally being bought and sold on the black market.

Then, of course there are the women who put their bodies and lives on the line in order to obtain the “raw materials” needed for this cultural experimentation.

Women like Maggie, who was never informed of the risks egg donation posed to her own health and well-being. Who was used repeatedly for others’ gain, but when things turned bad for her, she was left on her own to navigate tests, treatments, surgeries, and an unknown prognosis.

Women like Brooke, an Idaho woman who served as a surrogate three times and died last month carrying twins, reportedly for a Spanish couple.

Surrogacy and egg donation —- especially in places like India -— takes advantage of those of a lower social position in life and then exploits them.

HBO Vice correspondent, Gianna Toboni, recently traveled to India to report the country’s booming surrogacy industry where impoverished women are recruited to be “gestational carriers” for middle-to-upper-class Western women. In an interview with NY Magazine, Toboni said that most American couples turn a blind eye or don’t want to know what goes on behind the scenes in Indian surrogacy agencies because, “they want their baby fast, and they want it done cheaply.”

The practice of commercial surrogacy is indistinguishable from the buying and selling of children. In fact, Cambodia has gone so far as to announce plans to officially classify surrogacy as human trafficking. And in 2011 the European Parliament passed a resolution calling surrogacy “an exploitation of the female body and her reproductive organs.”

Women did not come this far to be treated like breeding animals.

Even the men, whose contribution may not be quite as risky to his health or life as the women, are known only by a number and a set of physical characteristics. “Donor #T5, brown-haired and brown-eyed with O-positive blood type.”

To quote a saint whose feast day we celebrated last month: “A person’s rightful due is to be treated as an object of love, not as an object for use.”

How is that equality? 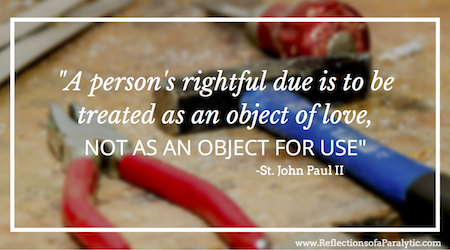