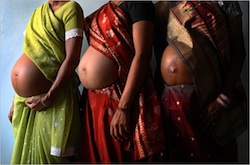 In the latest Vice for HBO documentary, Outsourcing Embryos, correspondent Gianna Toboni traveled to India to report India’s booming surrogacy industry where impoverished women are recruited to be “gestational carriers” for middle-to-upper-class Western women who don’t want to pay the higher rates in places like the United States.

What she found was more shocking than even I could have imagined. Not only are the surrogates routinely exploited and mistreated, but there is an emerging black market for “extra” babies.

To maximize results, surrogates are often implanted with multiple embryos. If the couple only wants one child, any “extras” born are sold on the black market. What’s worse, these couples often have no idea their children are being sold to the highest bidder.

NY Magazine interviewed Toboni, who said that most American couples turn a blind eye or don’t want to know what goes on behind the scenes in Indian surrogacy agencies because, “they want their baby fast, and they want it done cheaply.”

While she wasn’t surprised by the existence of the black market for extra babies, she was surprised by how easily they were able to find it. “We didn’t find any orphanages,” said Toboni, “but then, when a couple offered me a baby for sale over dinner, it was shocking.”

The following video is from that exchange:

Horrifying. Surrogacy has become full-scale human trafficking. Can anything be done to stop this?

Toboni suggests more regulations. Certainly tighter (ANY) regulations might help lessen the damage. But I’m afraid nothing less than an outright ban on surrogacy will make any impact at this point.

At the very least, reproductive tourism to India should be outlawed. But, things aren’t so rosy here in the United States, either, you know. As Jennifer Lahl and the CBC showed us in their documentary Breeders.

I don’t deny that that this technology has helped create many beautiful children and loving families that might not exist otherwise. But it’s time to take our blinders off — to look past the feel-good narratives and think logically about what is really going on here and where it is taking us.

See also: Made in India