My friend and BioTalk partner, Rebecca Taylor, recently wrote on the horrifying reality we currently find ourselves with regard to genetic engineering and human cloning and expressed her frustration at the…mild (to put it kindly) reaction from pro-lifers.

I feel her frustration.

To their credit, some of the mainstream pro-life news sites do report on these issues. But are pro-lifers paying attention? Do they realize the gravity of the situation we’re in? Do they care?

Taylor cites an example from her own writing published on LifeNews:

In August, I wrote a piece posted to LifeNews warning pro-lifers to be careful where they send their donations for the Ice Bucket Challenge. It pointed out how money given to the ALS Association may, I emphasize may, end up funding one study that used stem cells from an aborted fetus. Close to 50,000 shares.

I recently wrote a post for LifeNews on four things people can do to stop the certain creation of genetically-modified kids with the three-parent technique: 257 shares.

Another example I came across recently on another major pro-life news source was an article published two weeks ago “debunking” the same old “pro-abortion myths” that we’ve been talking about for 40 years that has been shared on Facebook almost 2 thousand times, meanwhile a month-old article on the UK’s historic vote to allow the creation of three parent children barely broke 500.

I see this disparity often. I follow so many dedicated pro-life people across a broad spectrum of social media sites and the pro-life information they share is almost exclusively about abortion. Rarely do I see anything about cloning come across my feeds, and when I do it’s often accompanied by outdated arguments about embryonic vs. adult stem cells, etc… 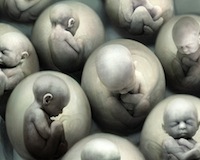 Perhaps it isn’t fair to judge public interest based solely on social media shares, and there are probably plenty of other reasons for the disparity — genetic engineering issues are newer, more scientific, harder to understand, etc… — but right now it does not seem like human cloning, three parent IVF and the like are major concerns even for dedicated pro-lifers. They’re just not being fought with the same intensity as abortion is.

Thankfully, Rebecca and I aren’t the only ones who have noticed this recently. Chalking it up to just a lack of knowledge when it comes to more complicated and obscure bioethics issues, Zachery Gappa, Managing Editor at the John Jay Institute Center for a Just Society, also noticed the fact that pro-lifers aren’t as proactive on those issues as they are on abortion and warned, accurately:

Pro-lifers will lose the next stage of this argument unless they become more informed. The graphic abortions we have known over the past few decades will soon be largely a thing of the past, but we may be killing more unborn children than ever before.

Pro-lifers would do well to heed that warning. It’s not easy keeping up with all the attacks on human life and dignity these days. And I understand that some of these biotech issues can seem intimidating to learn and talk about — it’s easy to just stick with what you know. But we cannot afford to let these things fall through the cracks.

I read a quote recently from a Dutch ethecist who said of euthanasia, “Once the genie is out of the bottle, it is not likely to ever go back in again.” The same can definitely be said for human cloning/genetic engineering.

The good news is that this technology is still new enough that we can influence public opinion — if we act now. If not, then it could take generations more to reverse what has been done.

What can we do?

1. For starters: educate yourselves. And then continue educating yourselves. The science is ever changing and scientists (much like abortion advocates) are constantly changing the language to confuse things and make otherwise atrocities sound more appealing and less harmful.

Gappa has some good advice:

You don’t need to take a college course, just pay attention and seek out articles.

You could start with the following: news and analysis by NRO’s Wesley J. Smith, BioEdge for helpful news, The New Atlantis for broader technology and ethics discussions, and the Oxford Christian Bioethics journal. On top of that, if you really want to dig in, you could set up a site like Google News with keywords like “bioethics” and “stem cell research”, to pull in relevant news stories from a vast array of sources. But more than anything else, the key is not so much in finding the perfect source to read – the key is the willingness and drive to delve into bioethics.

When you hear something on the news, pull out your smartphone and spend 15 minutes trying to begin to get a handle on what is actually going on.

Other good resources: the National Catholic Bioethics Center, The Center for Bioethics and Culture Network, and, of course, Mary Meets Dolly. Rebecca and I will also be working on new episodes of BioTalk starting next week. In the meantime, you can play catch-up here.

2. Spread. The. Word. To those you know, friends and family. Most people don’t have a clue about what’s going on in this area of human life science and the media is often too biased or too uninformed to be of any real help. So share news stories about it and then tell them what you think. Let them know that there is more to consider than just what is on the surface.

British MPs approved three-parent IVF after heavy pressure from scientists. Personally, I think it’s time we start putting pressure on our lawmakers to do something about this over here. And we shouldn’t be afraid to. Several countries have laws banning this kind of human experimentation.

Here in the U.S., however, there are currently no laws banning or restricting any kind of human cloning. And when it comes to three-parent IVF and germ-line genetic engineering, all we have here are regulations by the FDA — which has been reconsidering some of those restrictions in recent years.

Right now we’re in the middle of 40 Days for Life. While you’re praying for an end to abortion and the conversion of abortion clinic workers, why not add an end to human cloning (it is happening) and the creation, manipulation and destruction of human life in the name of science and fertility, and the conversion of IVF doctors and cloning scientists to your intentions?

I don’t know if they still sell them, but personally I’ve also picked back up and started regularly using my copy of the Rosary Crusade Safeguarding Embryonic Human Life that the St. Louis diocese pro-life office issued to fight Amendment 2.

The Brave New World may soon be upon us, whether we like it or not, but let’s not watch it advance without putting up a fight!