I know it does. 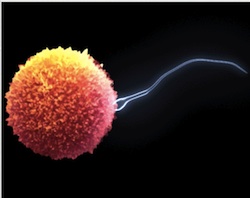 I don’t know how many times I have heard it. Well-meaning Catholics who say, “As a Catholic, I believe life begins at conception.” I have decided that my mission in life is to correct this miscommunication because it is that very line that lets everyone who is not Catholic dismiss everything we have to say about stem cell research, cloning and reproductive technologies.

We Catholics do not “believe” life begins at conception, also called fertilization. We instead know that it does because it is a cold hard fact of nature that a new, distinct, human organism, identifiable by his or her unique DNA, is created at the completion of fertilization. That is not a belief. That is a fact.

A fact bolstered by embryology:

Even a secular children’s book on human reproduction from my local library is clear:

“But nine months before, when you first began, you were just one little cell, even smaller than the dot at the end of this sentence. Half of this cell came from your mother’s body, and the other half came from your father’s body.”

A reader writes: “I cannot imagine a more eloquent statement of the subject. Rebecca’s article is amazing. I hope other readers pass it on.” Indeed it is and I hope you will pass it on as well!

One Comment on “I Don’t “Believe” Life Begins at Conception…”