I’ve told you a few times that I am in the middle of Dean Koontz’s Frankenstein series about transhumanism and the deadly quest for human perfection and immortality. I’ve never read Koontz before, but decided to pick this series up since it is related to many things I discuss here on my blog. So far it has not disappointed.

I’m not yet to book number 3 and now Koontz has come out with a fourth installment to his take on the mad scientist made famous by Mary Shelly in the early 19th century. Lost Souls is available this Tuesday (6/15/10).

Here is what the author has to say 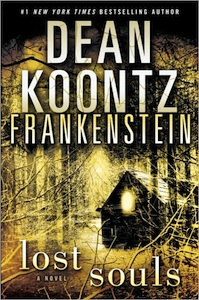 about his new book. (via Amazon.com)

When I finished the third Frankenstein novel, Dead and Alive, I foresaw that it was the end of the series. As it turns out, I was as right about this as I was about my prediction that the annual Academy Awards TV special would be hosted five years running by Muammar Gaddafi.

My original trilogy brought to an end a story cycle, but the themes of Shelley’s novel are more timely by the month. I realized that I could do much more with the concept than I had done thus far. Furthermore, an entirely new kind of technology of creature-creation occurred to me, and it was a lot more terrifying than the messy-gooey, strictly biological New Race that Victor developed in the first trilogy. By moving the setting from New Orleans to Rainbow Falls, Montana, I was able, as well, to change the atmosphere and to have fun with Armageddon occurring in snow-and-cowboy country.

As always, if readers hadn’t been so enthusiastic about these books, I wouldn’t have been able to proceed with the series. I appreciate your support more than I can say. I’ve received a lot of mail from readers who said they didn’t read these novels for the longest time because the whole Frankenstein thing turned them off, but when they finally tried them, they discovered these weren’t at all like what they expected, and they loved them. I always try not to give you the same old same old. Lost Souls has the flavor of my first three Frankenstein titles, but otherwise it does not clump over familiar territory. This time, Victor is much scarier and smarter than his predecessor, and his war against humanity is a blitzkrieg that comes on like a storm.

Lost Souls, like the books after it, is self-contained even though it is a part of a larger narrative. You can plunge into it and, if you like it, then go back to Prodigal Son, City of Night, and Dead and Alive if you wish. I am currently working on The Dead Town, recounting the next phase of the war against humanity, and I suppose it might sound a little strange to say I’m having a good time chronicling our doom.