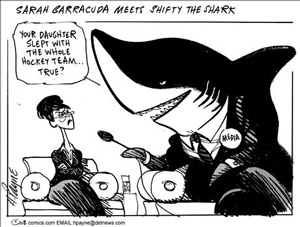 Well, that accusation hasn’t come out…yet. But it wouldn’t surprise me if it did. American politics, and the American media, has reached an all-time low with the ongoing smear campaign against Sarah Palin. Last week Vanity Fair published an “Authoritative Trig Palin Timeline” regarding the online rumors about Trig’s parentage. In it they juxtapose the “official story” with the “wingnut conspiracy theories” and encourage viewers to vote on which scenario is more likely. They even repeat a rumor about her alleged extramarital affair and suggest that’s how Trig might have been conceived. I think they are attempting (unsuccessfully) to be satirical here, but the very mention of this trash in their publication without criticism or rebuttal gives it some credibility. They’re not alone in this either. There was that US Weekly rag with the intentionally damaging headline: “Babies, Lies and Scandal!” And plenty of the tv news shows are discussing any and all of these Palin conspiracy theories, lies and personal attacks, critically or not (for example). See Charlie Martin’s now famous list (h/t) of all of the ridiculous Palin Rumors.

No Man’s Blog relates the whole circus to this scene from Monty Python and the Holy Grail:

She has been accused of naming two of her daughters after witches.

It is sickening that this garbage is making its way into what should be more “respectable” and “credible” news sources. Buy why such animosity toward this woman? What’s it all about? Wesley Smith says:
Their Hatred of Palin is Not About Energy Policy: It’s About Trig. Could it be? Consider the South Carolina Democrat Party leader’s suggestion that Palin’s “primary qualification seems to be that she didn’t have an abortion.” She has since apologized. And then there is this class act. NRO’s Monica Charen also thinks Trig is the cause of the media’s ire: Is Trig at the Heart of Media’s Reaction to Palin?

From Smith re: the Vanity Fair article:

This is Vanity Fair, not a supermarket tabloid. And it isn’t alone. Vile. Sexist. Defamatory. But nothing is too low a blow to destroy the monster who dared give birth to a baby with Down syndrome and declare that she saw perfection in his eyes.

The coming media judgment – I can see it now:

The Almighty: Did you dress Sarah Palin up as an adulterer, a liar, a neglectful mother, etc…?

Is it just Trig that sends these people over the edge? Perhaps. But I think it’s more than that. I agree with Mark Shea, their main problem is the fact that they’re just Freakish Enemies of the Normal. Happy marriage, bad! Large, loving and supportive family, bad! Electing to love and care for a disabled child, BAD! Successfully balancing motherhood and a career, bad!

One Comment on “She Turned Me ino a Newt!”