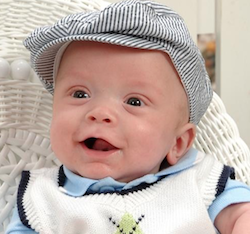 I introduced you guys to Ethan back in April when his mother, a friend of mine from college, posted this picture of him on her Facebook page with the caption:

This Easter pic is dedicated to all the doctors and so called specialists who suggested we terminate our pregnancy as it was “incompatible with life.” He looks pretty good to me.

When Kaitlyn was 18 weeks pregnant they found she had next to no amniotic fluid and she and her husband James were told that little Ethan had “no chance.” Lucky for Ethan his parents refused to listen to the doctors who did not value their son’s precious life.

Below is a video that she uploaded last month commemorating the first anniversary of the day doctors told her that the baby boy she was carrying was incompatible with life:

Naturally, it’s difficult to watch a loved one struggle and fight for life, especially one so tiny and helpless, but that doesn’t mean that their life is not worth living – and loving – for however long that turns out to be. Be not afraid.