Last month NBC premiered a new sitcom about a young, single mother who agrees to become a gay couple’s surrogate mother. The pilot episode opens with a sweet video in which one of the main characters, Bryan, talks to his future child, explaining how badly he/she is wanted. It’s an appealing sentiment, and yet, that’s precisely the problem with assisted reproductive technology (ART), isn’t it? People so blinded by their own desire for a baby that they don’t stop to consider whether the this is really good for the children they so desperately long for.

While Hollywood offers light-hearted, feel-good narratives about egg/sperm donation, IVF and surrogacy, the reality is not always so rosy, especially for the children born of this technology who have half of their identity deliberately withheld from them.

Giving voice to many of these donor conceived sons and daughters (some of whom may also unknowingly be brothers and sisters) is Alana S. Newman, founder of the Anonymous Us Project, a support group for the children of anonymous sperm donors.

Recently Alana took her message to a charity fundraising event in New York City to raise money for Gay men to have babies via reproductive technology and surrogacy. Unable to get in to the event (not that really wanted to give money to this misguided charity, anyway) she stood outside and handed attendees a letter she drafted as they entered the event. 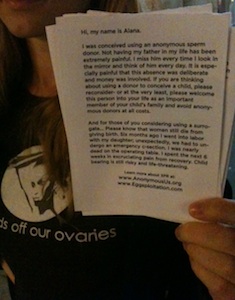 Hi, my name is Alana.

I was conceived using an anonymous sperm donor. Not having my father in my life has been extremely painful. I miss him every time I look in the mirror and think of him every day. It is especially painful that this absence was deliberate and money was involved. If you are thinking about using a donor to conceive a child, please reconsider — or at the very least, please welcome this person into your life as an important member of your child’s family and avoid anonymous donors at all costs.

And for those of you consider using a surrogate . . . Please know that women still die from giving birth. Six months ago I went into labor with my daughter; unexpectedly, we had to undergo an emergency c-section. I was nearly dead on the operating table. I spent the next 6 weeks in excruciating pain from recovery. Child bearing is still risky and life-threatening.

In an interview with the CBC’s Jennifer Lahl, Newman said that, for the most part, people took the flyer and read it peacefully as they went inside, but she did get a few negative reactions. Something that, unfortunately, she has become accustomed to since she started her advocacy.

“People are extremely vicious,” she said in the documentary Anonymous Father’s Day. “[t]here is a huge monster of money and people desperate for children, who don’t want me to make it harder for them to buy and sell children.”

And, yet, when asked if she felt like her work was getting any traction, Newman told Lahl:

I do, I really do. People see the truth in what we’re saying. Parents fear their donor-conceived child will end up like me, but they know its a possibility when they initiate the process. It’s the most natural thing in the world to want to know who your parents are, which is why the UN Human Rights Convention asserts that every child has a right to be raised by their natural parents. Nearly everyone recognizes the truth and reason in what I have to say after I get an hour or two with them. The problem is that the infertility industry has cultivated a language full of euphemisms and lies that cloud the truth and confuse people.

I hope and pray that she is right. If anyone’s voice deserves to be heard on this issue it’s people like Alana — and Lindsay and Katrina and Narelle and Damian and Barry, etc… — especially considering their millions of lost and perpetually frozen brothers and sisters don’t have one.

Hear from more at AnonymousUs.org.