Dammit, Mitt. You don’t make it easy for me to want to vote for you as opposed to just voting against Obama. 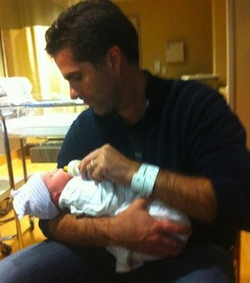 I knew that Mitt Romney’s son Tagg had used IVF and a surrogate mother twice to give birth to three of his six children. I didn’t hold his son’s actions against Mitt himself, though. That was, of course, until I found out that he actually paid for part of this transaction. Specifically, he helped pay for some of the expenses for the surrogacy agreement that each party had to sign.

Some will look at this and wonder why it’s such a big deal when his opponent supports infanticide. Ok, sure. I will grant you that Romney’s not quite the avowed merchant of death that our dear president is. But that doesn’t mean that we should be silent about his own…less that pro-life views. As life issues goes, this is a pretty major one. One that doesn’t get discussed nearly enough, even among pro-lifers.

IVF and surrogacy are the total commodification of human life — born and unborn. Children are bought and sold in a business transaction rather than conceived in an act of love between a mother and father. Men and women are used as banks for spare baby making parts and human incubators. Then there are the millions of nascent human lives lost, destroyed or ‘frozen in time’. Lives that many scientists want to get their hands on in order to cannibalize them for their stem cells.

Seriously. You know it’s bad when even the children born of this technology question aspects of their conception.

Assuming the TMZ report is correct (and I haven’t seen it denied or disputed anywhere, yet), Mitt Romney helped pay for this.

Not surprisingly, when I posted this story on Facebook last week some friends of mine immediately got into a discussion about whether or not it was right to refuse to vote for Mitt Romney (as well as Barack Obama, obviously). Personally, I don’t blame anyone else who decides that they cannot vote for him in good conscience. Mitt Romney’s pro-life views are questionable, at least and this latest bit of information certainly doesn’t help matters any.

I’m not saying that I’m not voting for him. I understand that the perfect should never be the enemy of the good (indeed I don’t believe that there could ever be a perfect candidate). And, as I mentioned earlier, Romney certainly is not as committed to the culture of death as his opponent. However, I also agree with Archbishop Chaput who wrote concerning two “crappy”, as one of my friends put it, choices:

“There isn’t one “right” answer here. Committed Catholics can make very different but equally valid choices: to vote for the major candidate who most closely fits the moral ideal, to vote for an acceptable third-party candidate who is unlikely to win, or to not vote at all. All these choices can be legitimate. This is a matter for personal decision…”

It’s one thing to refuse to vote out of sheer laziness or apathy. It’s quite another to seriously look into each candidate’s positions and policies and decide that your conscience won’t let you vote for either. It is, as Archbishop Chaput said, a personal decision.

2 Comments on “There Isn’t One ‘Right’ Answer Here”