In his first letter to the Corinthians, St. Paul explains how, when God calls people, he does not base his decision on human criteria – wisdom, power, nobility – but often chooses uneducated, unimportant and even despised people in the world’s eye to convert the wise, the strong and the “important”.

Consider your own calling, brothers and sisters. Not many of you were wise by human standards, not many were powerful, not many were of noble birth. Rather, God chose the foolish of the world to shame the wise, and God chose the weak of the world to shame the strong, and God chose the lowly and despised of the world, those who count for nothing, to reduce to nothing those who are something, so that no human being might boast before God. It is due to him that you are in Christ Jesus, who became for us wisdom from God, as well as righteousness, sanctification, and redemption, so that, as it is written, “Whoever boasts, should boast in the Lord.” (1 Corinth. 1:26-31)

Obviously Jesus Christ himself is the supreme example of what St. Paul is talking about here. As a newborn baby in Bethlehem he was greeted by kings and adored by shepherds and at his presentation in the Temple, this 40-day-old infant who was, by all appearances, nothing more than a “carpenter’s son” is recognized by two prophets as the Savior of the world. An infant Savior! The paradox of our Lord and Savior’s humble human origins also makes me think of Christ crucified and the foolishness and weakness of God that is wiser and stronger than men (1 Corinth. 1:23-25).

The Apostles and many of the first Christians also demonstrate God’s desire to use the lowly of the world to carry out his will and he has not stopped using those who are weak by the world’s standards to reveal his glory and shame the proud and the strong to this day. There are many modern day examples of this. The following came to my mind when I heard the above reading from St. Paul at Mass last Saturday. 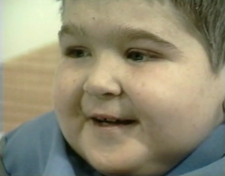 To the “wise and learned” of the world, life with a disability or terminal illness is not worth living. When a child is prenatally diagnosed with various diseases parents are pressured to abort and assisted suicide is promoted as a way to escape pain and suffering. Enter Garvan Byrne. Terminally ill and handicapped from birth, young Garvan endured intense pain as he faced certain death at the tender age of twelve. Throughout all of the trauma, however, he remained hopeful and optimistic, finding peace and meaning in life that most healthy, able-bodied adults have never seen.

In 1985, just a two months before he died, eleven year old Garvan recorded an interview with Mother Francis Dominica, the founder of one of the hospices he often visited. It has been uploaded to YouTube in three parts. If you can, do yourself a favor and set aside about 20 minutes to watch all three, you will not regret it.

Abortion is the ultimate war against the weak and here I think of abortion survivors like Gianna Jessen and Melissa Ohden. How in their cases God used an infant, the very weakest among us, to show their would-be assassins who really has power over life and death. Not only that, but now both of them are very outspoken, internationally known pro-life speakers – Gianna with her “gift of Cerebral Palsy” on top of everything – and have challenged many who see nothing wrong with the stronger dominating the weaker and deciding who lives and who dies.

“I didn’t survive so I could make everyone comfortable. I survived so I could stir things up a bit. And I have a great time doing it.” –Gianna Jessen

In 2008 Jessen addressed Queen’s Hall, Parliament House in Victoria, Australia on the eve of the debate to decriminalize abortion in Victoria. It is one of the best pro-life speeches you’ll ever see. Watch it. That same year, she also used her powerful voice and story to highlight then candidate Obama’s disturbing defense of doctors killing babies just like her who survived abortion attempts. This year Ohden has lent her voice to a similar campaign. There ain’t nothin’ weak about these two women anymore!

“Whoever boasts, should boast in the Lord.” These words of St. Paul tell all of us to recognize our own weakness, the limits of our human nature, and have recourse to God, apart from Whom we can do nothing (John 15:5). We may not be physically poor in health, wealth or knowledge, but we can always allow ourselves to be poor in spirit, detached from our own ego, so that the power of Christ may more easily dwell within us, strengthening us to carry out his will.

“‘God chose what is weak in the world to shame the strong’ (1 Cor 1:27). Therefore the true minister of Christ is conscious of his own weakness and labours in humility. He tries to discover what is well pleasing to God (cf. Eph 5:10) and bound as it were in the Spirit (cf. Acts 20:22), he is guided in all things by the will of him who wishes all men to be saved. He is able to discover and carry out that will in the course of his daily routine by humbly placing himself at the service of all those who are entrusted to his care by God in the office that has been committed to him and the variety of events that make up his life.” (Presbyterorum ordinis, 15).

4 Comments on “The Weak Who Shame the Strong”