Below is a “guest post” from my good friend Jim Cole, Legal Counsel for Missouri Right to Life, about the imbroglio that Newt Gingrich caused with his comments about implantation last week. The Gingrich campaign has been on damage-control with pro-lifers for days now attempting to “clarify” Newts pro-life position, assuring us that he believes that life begins at conception. But, as Jim mentions below (and Jill Stanek pointed out earlier today), he has not directly renounced what he said last week. Here’s Jim: 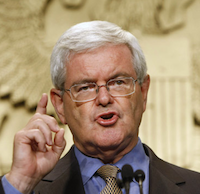 On ABC News last Thursday, December 1, Newt Gingrich stated that he considered that a human being begins at implantation. The interview in which he delivered his off-the-cuff remark has been posted in several locations, including ABC’s site here.

The Gingrich campaign has attempted to control the damage among pro-life supporters. One the campaign’s communications may be read here. To date, Newt has not yet directly retracted his erroneous statement, to my knowledge.

No one needs to consult theology to understand the problem here; biology will do nicely. Biologically, a human being exists from conception, when the identity, sex, and genetic characteristics of a new human being are set. When the chromosomes from the sperm and those from the egg have completed their awe-inspiring dance toward each other to achieve complete union, a new person’s genetic identity comes into being. The new human is anything but a mere part of the mother’s body; half the time he is a different sex from the mother, for goodness’ sake, and at all times, the human genetic identity of the child is different from that of the mother.

Moreover, the baby is in charge of his or her development, not the mother. It takes a week for the baby to travel from one end of the Fallopian tube, where conception takes place, to the other, where he or she emerges into the womb. During that time, amazing changes take place, stunning in their multiplicity and complexity. One need only read a recent on-line course on human reproduction posted by the Universities of Bern, Fribourg, and Lausanne in Switzerland for a sample. (See particularly Modules 4 through 6.) From that source and others (e.g., the Endowment for Human Development), the moving picture of development is clear. At the very beginning, the new human being consists of one cell. By the time he or she emerges into the womb six or seven days after conception, the early human has become a blastocyst, consisting of over 200 cells that are already specializing into different layers and types of tissues. (Some of them are the stem cells that have caused so much controversy in the last decade. It kills the developing human to open him or her up and take the stem cells from inside. Hence the controversy.) The processes now are so complex that scientists still have not figured them out.

All this development takes place in the first week, before implantation, while the new human is traveling within a flexible biological container called the “zona pellucida.” The zona pellucida insulates the developing baby from the walls of the Fallopian tube so that he or she does not implant in the wrong place. Once the new human enters the uterus (womb), he or she “hatches” out of the zona pellucida, much like a bird squeezes out of its eggshell, and emits chemicals that signal the uterine wall to build up in certain places to get ready. The mother’s body responds; it does not initiate. Approximately 24 hours later, the new baby, no longer insulated from contact, bumps into the uterine wall, adheres there, and begins the process of growing in the luxuriant lining that has thickened as a result of the baby’s signal to get ready.

This short outline of early human development shows how impoverished is the mindset that can offhandedly refer to such as thing as implantation of a “fertilized egg.” Mr. Gingrich did so in the ABC News interview, just as his interviewer did. Ladies and gentlemen, repeat after me: There is no such thing as implantation of a “fertilized egg.” It is a myth. The facts of biological development show that a self-directing, self-organized, complex living human organism implants in a mother’s womb, not a one-celled, passive passenger carried along in a process biologically driven by his or her mother. We should dump the concept of implanting a “fertilized egg” in the same place that we dumped the concept of a flat earth over 500 years ago.

If Newt Gingrich has shortcomings in the theology of the Catholic faith that he adopted a few years ago, his error on the status of an early human being should not be counted among them. He needs to learn biology, not theology. Pro-lifers hope that he studies soon and takes basic biological knowledge to heart. All innocent human beings are entitled to respect and protection of their lives, no matter what their stage of development or condition. To withhold that protection at the earliest stages of development before implantation simply does not make biological sense.

Newt, open a biology textbook soon. The pro-life movement knows that what you find there is a matter of human life and death.