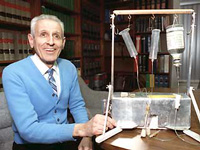 It was supposed to be in October, but last night Dr. Jack Kevorkian delivered his $50,000 speech to a crowd of roughly 4,900 at the University of Florida basketball arena. This is truly disappointing to me as a life long Gator fan. He was not allowed to discuss euthanasia in detail, but he sure made the most of what he could say. He mentioned assisted suicide’s frequent and accepted use in ancient Greece and Rome and commented that they were, “way ahead than we are now.” Of his own practice of assisting suicide he said:

“My aim in helping the patient was not to cause death,” he said. “My aim was to end suffering. It’s got to be decriminalized.”

This is a message that resonates with so much of our society. Suffering is looked upon as the greatest moral evil of our time which should be avoided and eradicated at all cost. But why?

Of course no one wants to see another in pain. But suffering and adversity not only build character, but, when seen in light of the Cross, they become the very tools for our sanctification and union with our Creator.

Instead of being told their life no longer has meaning and therefore must come to an end, the elderly and those suffering terminal illness must be encouraged in their current state of suffering to realize the true gift that has been set before them. We must also love these individuals in a way that affirms their dignity as human beings and which assures them that there is more to life than physical ability. Suffering is not the end of the world, rather it prepares us for the world without end:

“In this you rejoice, though now for a little while you may have to suffer various trials, so that the genuineness of your faith, more precious than gold which though perishable is tested by fire, may redound to praise and glory and honor at the revelation of Jesus Christ.” (1 Pet 1:6-7)

2 Comments on “Dr. Death Delivers His Speech at Florida”