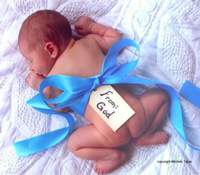 Wesley Smith has a post asking whether infanticide qualifies as murder and should be a crime. It is a response to a recent news story about a teenage girl who gave birth on the floor of her laundry room and then proceeded to stab her child 135 times; dumping the dead baby’s body in the trash can when she was done. Wesley concludes that he believes newborn infants are human beings and infanticide is murder, but acknowledges those, like Peter Singer, who believe otherwise and asks his readers to chime in on their own thoughts.

The way Mr. Smith words his question is key: should the intentional killing of a newborn baby who is not wanted be a crime? This is the dilemma in our society and this is where the culture of death is ultimately leading us. In 1973 the Supreme Court determined that it was perfectly legal (a constitutional right even) for one group of living human beings, unborn children, to be killed simply because they are not wanted. By legalizing abortion in our society we have categorically decided that the child within the womb is not actually “alive” or is not a “person” (as long as it is not wanted) and therefore it is alright to “terminate” it. So what happens to that life after it is born? What if a woman gives birth to a child and decides that she doesn’t want it?

To our credit, American society and the American justice system has determined that it is wrong to deliberately kill a newborn infant in cases like the one mentioned above. Nicole, was charged with first-degree murder with bail set at $1 million. This case isn’t anything new either. Who can forget 10 years ago when young Melissa Drexler gave birth in a bathroom stall at her senior prom, suffocated the baby boy, put his body in a trash can and continued on with the prom festivities? Originally charged with first-degree murder, she was eventually sentenced to 15 years after pleading guilty to a lesser charge of aggravated manslaughter.

But not all American born infants killed after delivery receive the same justice. According to Jill Stanek, “Induced-labor abortion is one of the best-kept secrets within American hospitals.” This procedure does not always kill the infant in-utero. Many times the infant is delivered alive, only to die on a shelf sometimes minutes or hours later. Despite the Born Alive Infant Protection Act, these cases are not heavily pursued.

And what about disabled newborns? With all that has been happening in Texas with baby Emilio, one has to wonder if we might one day face a push by doctors for active euthanasia for disabled infants – like what we see happening in the UK.

Bottom line: we must win this culture war! We must continue to spread the word and encourage women to love and care for the child that God has blessed them with – even if that means giving it up for adoption. All human beings are precious in the eyes of God and they all have the right to life. “We cannot solve all the problems in the world, but let us never bring in the worst problem of all, and that is to destroy love” (M. Teresa), which is what happens when we permit abortion and the killing of the most vulnerable in our society.

Previous posts:
Abortion Has Progressed to Infanticide
Lives Not Worth Living