Dear Readers, this Presidential election has really been giving me a head(and a heart)ache. I have found my values tested like never before and I find myself constantly questioning my convictions. Because of the ideological split in our country on more issues than just the right to life, there is tremendous pressure to beat the other guy at all cost, even if we must temporarily set aside some of our deepest held moral principles or at least rationalize a way in which such a vote would actually help or advance our cause. Some of these rationalizations are quite persuasive and cause me to wonder if I’m being unfair and unrealistic in my standards for qualification. But as I listened to various athletes recite the Declaration of Independence yesterday before the Super Bowl (see video below) I thought, how can I possibly lower my 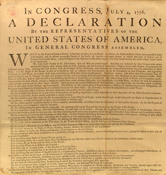 standards? To do so violates not only the laws of God, but it weakens foundation for the American Nation.

When it comes to politics, the issue of life is not just about Roe v. Wade or the Supreme Court. It’s about the Constitution and the foundation of American freedom and democracy as laid out in our Declaration of Independence – the self evident truth that all men are “created equal” and endowed with the “unalienable…right to Life.” Defending this right is essential to preserving America’s freedom.

“If by the mere force of numbers a majority should deprive a minority of any clearly written constitutional right, it might in a moral point of view justify revolution; certainly would if such right were a vital one.”

At this point in our Nation’s history, the weakest and most vulnerable members of our society are deprived of the vital and fundamental right to life and as a result 50 MILLION Americans have been murdered in the last 35 years under the full protection of the law. Lawmakers want to give scientists a blank check to fund the immoral practice of using and destroying human embryos for scientific research and we’re moving closer and closer into the “brave new world” of artificially creating human beings for the sole purpose of such research. CLONING human beings – can you imagine!? Well, you don’t have to imagine anymore, for just this month researchers in California succeeded in cloning human embryos for the very first time. And this is still legal in our country!! In fact some lawmakers have recently tried to pass a federal law similar to Missouri’s 2006 Amendment 2 that would protect the cloning of human embryos for research as a federal right. Along with abortion, this is a serious violation to the inherent dignity of the human person!

If we continue at the rate we’re going, the terrorists won’t have to come over and kill us; we’re likely to destroy ourselves. In the United States we celebrate “freedom”, yet deny that freedom to the weakest and most vulnerable members of our society.

To quote another famous Republican President:

“Abraham Lincoln recognized that we could not survive as a free land when some men could decide that others were not fit to be free and should therefore be slaves. Likewise, we cannot survive as a free nation when some men decide that others are not fit to live and should be abandoned to abortion or infanticide…there is no cause more important for preserving that freedom (America as a free land) than affirming the transcendent right to life of all human beings, the right without which no other rights have any meaning.” RR, Abortion and the Conscience of a Nation

Perhaps a revolution is at hand. As the Republican Party moves further to the left on life issues, our willingness to accept whatever vaguely “pro-life” candidate they set before us who has the

best chance to win, does nothing to help our cause overall. The Republican Party platform once stated (my emphasis added):

“As a country, we must keep our pledge to the first guarantee of the Declaration of Independence. That is why we say the unborn child has a fundamental individual right to life which cannot be infringed. We support a human life amendment to the Constitution and we endorse legislation to make it clear that the Fourteenth Amendment’s protections apply to unborn children. Our purpose is to have legislative and judicial protection of that right against those who perform abortions. We oppose using public revenues for abortion and will not fund organizations which advocate it. We support the appointment of judges who respect traditional family values and the sanctity of innocent human life.”

Now it seems to have been reduced to simply “appoint strict contstructionist judges.” In fact the Republican Party once stood for a lot of other things that it no longer stands for. We have won many small political battles, but I am afraid we are losing the war.

Now, I am not so delusional as to think that we can have any sort of perfection, especially in a political candidate (or any man for that matter). Perfection is not the issue. The issue is protecting every citizen’s constitutional right to life, a standard that officials from every branch of government should be held to. We can’t legislate morality, but as a nation we can stand for the moral principles our country was founded on. The answer’s not easy, but it’s simple, “if you and I have the courage to tell our elected officials that we want our national policy based on what we know in our hearts is morally right.”

“We cannot buy our security, our freedom from the threat of the bomb by committing an immorality so great as saying to a billion human beings now enslaved behind the Iron Curtain, ‘Give up your dreams of freedom because to save our own skins, we are willing to make a deal with your slave masters’…We have a rendezvous with destiny. We’ll preserve for our children this the last best hope of man on earth, or we’ll sentence them to take the last step into a thousand years of darkness…We have the ability and the right to make our own decisions and determine our own destiny.” (RR again, he was not talking about life issues then, but it fits, see video below)

We are not called to be successful, but only to be faithful.

The Declaration of Independence – listen to it, read it, memorize it

From Texas Fred:
In 1776 our forefathers put their lives and fortunes on the line when they signed the Declaration of Independence, they didn’t settle for 2nd best, they didn’t choose the lesser of 2 evils, they chose FREEDOM and they staked their lives and liberty on that act of revolution

Here is the video of Reagan’s speech:

Also read:
The Shaking of the Republican Party
Wanted: Pro-Life Integrity
I’m Pro-Life, And I Vote

3 Comments on “Do We Have a Rendezvous With Destiny?”