Since scientists in China confirmed last year that they have been editing the genomes of several non-viable human embryos from IVF clinics using a new promising gene-editing technique called CRISPR, most of the discussion about gene editing technology has centered around altering human embryos to eradicate certain diseases.

It sounds like a great idea, but there are some serious ethical concerns.

First, this kind of germ-line modification genetically alters future generations without their consent — and there is no telling what kind of effect this will have. Then, of course, there is the fact that many, many embryos and fetuses will have to be sacrificed on the alter of science to finally make it a reality.

There is also the likely possibility that it won’t long be limited to merely treating genetic defects, but upgrade to enhancing otherwise healthy embryos, which, as Rebecca and I talked about in the last episode of BioTalk, is a “biological arms race” that no one can win.

It should be noted, however, that altering embryos is not the only way gene editing technology can or should be used.

In the last episode of BioTalk Rebecca also encouraged the ethical use of gene editing technology like CRISPR in patients living with diseases today. 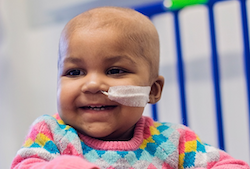 One-year-old Layla is a beautiful example of gene editing technology put to good, ethical use.

Layla’s leukemia — that doctors were almost certain she would shortly die from — is currently in remission thanks to gene-editing technology that allowed her to receive modified immune cells from another person.

“Her leukemia was so aggressive that such a response is almost a miracle,” said Paul Veys, a professor and director of bone marrow transplant at Britain’s Great Ormond Street Hospital (GOSH) who led the team treating Layla.

According to Nature, her case is the second trial of gene-editing as a therapy. It was first used to treat 12 people with HIV.

The therapy that Layla received takes immune cells from a healthy donor and exposes them to a type of DNA-cutting enzyme called a TALEN.

The enzyme deactivates immune genes that would otherwise cause the donor cells to attack when injected into a person with leukaemia, and modifies genes to protect the new cells from anti-cancer drugs that the patient is taking.

The individual then undergoes therapy to destroy his or her own immune system, which is replaced with the modified cells. The treatment is not a permanent solution for leukaemia patients, says Qasim, but rather a ’bridge‘ to keep the person alive until a matched T cell donor can be found.

When added to blood extracted from the patients, the ZFNs cut the gene for a protein on T-cells targeted by HIV, and the team then pumped the cells back into the patients.

The results were positive and more than 70 patients have now been treated with the therapy.

More of this, please!

Gene editing is not unethical in and of itself. Using these gene-editing techniques on patients in a non-germ-line fashion is a much better approach. This gives each generation the opportunity to not only benefit from new advances, but also give consent.