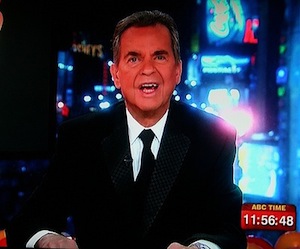 While I will give Clark points for trying, the entire thing has become very uncomfortable and is disrespectful to the Dick Clark legacy. Throughout the years as a producer and on air personality, Clark always had an eye for detail and a commitment to utmost professionalism. Nobody wants to be cruel to Clark, but the fact is, he’s in an entertainment business. And the part of the entertainment business that his show, “Dick Clark’s Rocking Eve”, is part of is centered on youth and hope for the future.

While nowhere does it say there is or should be a maximum age, the ability to project hope and optimism for the future, as the New Year arrives is, at this point, impossible for Dick Clark. He needs to gracefully leave the stage now as his inability to articulate cleanly and crisply what he is saying is turning Dick Clark’s Rocking Eve from most see television for its execution, excitement and show, to must see television to see what Dick Clark might do next. It’s cringe-worthy at this point.

I can’t say it much better than Matthew Archbold, writing at the National Catholic Register:

Dick Clark is not a legacy, he is a human being.

In these modern times, we seem to feel increasingly “uncomfortable” with anyone who looks less handsome than an A-lister or doesn’t speak as well as Ryan Seacrest. We don’t do sickness anymore. We don’t do ailments. The disabled are something to be hidden away, embarrassed about.

We used to care for our grandparents at home so we all grew up knowing a little something about it. We watched our father carry his mother upstairs after dinner every night. We watched our mother wipe her mother’s face with a napkin. And we learned. We helped pick them up when they fell. And we tried not to notice how embarrassed they were.

But as a culture, we don’t really do that anymore. The old and disabled are all too frequently shipped off and visited infrequently. We prefer to remember them as they were we tell ourselves – as a way of honoring them. But that’s not what’s going on. We just don’t want to be reminded that life isn’t perfect, sickness happens, and disabilities don’t discriminate.

Maybe that’s why 90 percent of Down Syndrome babies are aborted. Maybe that’s why the elderly are euthanized for fear of becoming a burden. They must not be seen. They are the imperfect.

Dick Clark has had an amazing life. And this is the phase of life he’s in right now. Dick Clark was always a great host. But he seems to be more than that now. He seems heroic to me now. He knows he’s slurring his words. He knows he doesn’t look like the teenager he looked like for so long. And I think he’s exactly what we need to see. In these days when everyone on television looks vaguely perfect in a similar way, to me Dick Clark looks…human.

3 Comments on ““Dick Clark is Not a Legacy, He is a Human Being””