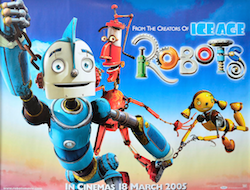 In the last episode of BioTalk, Rebecca Taylor and I discussed transhumanist images in several popular movies and television shows. One of those was an animated film called Robots. Rebecca called it a great movie for kids (rated PG) with a prophetic message about where Transhumanism will lead us.

In the movie, a power-hungry robot takes over one of Robot City’s biggest industries and ceases production on spare parts for the city’s residents in favor of shiny new “upgrades”. “Why be you when you can be new?” is the company’s new slogan and those who cannot afford to upgrade are collected and turned into scrap metal.

Shortly after we recorded that episode, I actually came across this movie in the $5 bin at my local WalMart. After watching it again, I highly recommend it, both for it’s cultural significance and because it’s just an entertaining little movie.

In her latest commentary at the National Catholic Register, Taylor explains what’s so prophetic about this quirky little flick:

Consider a recent story in The New York Times about a new hearing aid that is controlled by an iPhone app. The story begins with a 65-year-old hearing-impaired man going into a noisy night club.

He is able to adjust his hearing aids with his iPhone so that he can carry on a conversation in the middle of a torrent of background noise. The new hearing aids that can be fine-tuned for every environment are a great advancement for those with hearing loss, but the Times story does not stop with the therapeutic benefits. The author of the piece tried the hearing aid for himself. He wrote:

“Wearing these hearing aids was like giving my ears a software upgrade. For the first time, I had fine-grain control over my acoustic environment, the sort of bionic capability I never realized I had craved. I’m 35, and I have normal hearing. But if I could, I’d wear these hearing aids all the time.”

The author’s glowing endorsement included the “slight exaggeration” that these advanced hearing aids are “better than the ears most of us were born with.” The title of the piece is “Conjuring Images of a Bionic Future.”

As Rebecca notes in her article and we noted in BioTalk, it’s time for us to discuss this stuff, with each other, with our children.