What’s that you say? This blog isn’t geeky enough for you? It needs more Star Trek??

Well, if you insist…

This is an interesting exchange from an episode of the original series called The Mark of Gideon. I found it while I was browsing through Msgr. Charles Pope’s YouTube channel the other day.

Captain Kirk is talking to Hodin, the ambassador to the Federation from a planet that has become grossly overpopulated over time. When Kirk suggests contraception and sterilization as a solution to their problem, Hodin gives a beautiful defense of the sanctity of all human life — “from the fetus to the developed being.” 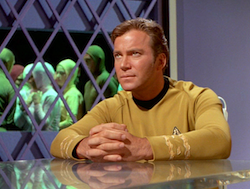 After finally watching the entire episode, I’m not sure the ambassador’s solution — allowing his daughter to sacrifice her own life in order to purposely reintroduce the planet to disease and early death — is much better than the Captain’s or any more respectful of the dignity of the human person. Nevertheless, it was a great little speech:

The people of Gideon have always believed that life is sacred, that the love of life is the greatest gift. That is the one unshakable truth of Gideon. This overwhelming love of life has developed our regenerative capacity and our great longevity…[W]e cannot deny the truth which shaped our evolution. We are incapable of destroying or interfering with the creation of that which we love so deeply — Life, in every form fetus to developed being. It is against our tradition. Against our very nature. We simply could not do it.

As far as the planet Earth is concerned, while some areas are certainly overcrowded, the planet itself is not. But that hasn’t stopped people buying into the myth of overpopulation and pushing sterilization and contraception on to the poor in developing countries. These days, the Bill and Melinda Gates Foundation are among the worst offenders. The Population Research Institute, which works to end coercive population control, and fight the myth of overpopulation which fuels it, is a good one to keep an eye on.

UPDATE: I discussed this episode on Catholic radio in Lexington, KY: listen.