Warning: it’s about to get mighty nerdy up in here. 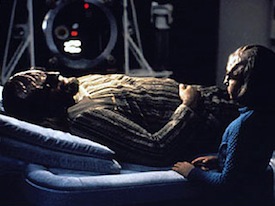 One of my favorite television shows when I was younger was Star Trek: The Next Generation. I’ve been watching some old episodes of the series on Netflix and recently I was very surprised and impressed with an episode called “Ethics” and the way it dealt with the issue of disability and assisted suicide.

The episode opens with Lt. Worf getting his spinal cord crushed by a couple of barrels in the cargo bay. As it turns out, there is still no cure for spinal cord injury in the 24th century. Devastated by his diagnosis, Worf asks Comm. Riker to help him perform ritual suicide because, “When a klingon can no longer stand and face his enemies as a warrior, when he becomes a burden to his friends and family, it is time for the Hegh’bat. Time for him to die.” 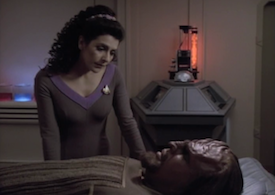 The real heroes of the episode are Riker and Counselor Troi who refuse to let Worf give up on his life. At one point, Riker confronts the wounded Klingon and reminds him of all the people on the ship who consider him a friend and owe him their lives and to think about how they might feel about his dying.

But, Troi definitely has the best line of the whole show when she tells Worf, “Maybe it’s time you stop lying here worrying about your honor and started thinking about about someone else. Like your son.”

When an otherwise able-bodied person has suicidal tendencies we consider it a cry for help, a sign that they are not emotionally or psychologically stable. Why does that view change when the suicidal person is sick or disabled?

The experience of a traumatic, life altering injury or disease affects a person mentally and emotionally just has it affects them physically. Your whole world suddenly changes and, as few people can really relate to such an experience, very often you are alone in that world with all its pain and challenges – envying the physical freedom of others (or your pre-injury self) and feeling slightly worthless or at least inadequate by comparison. A great tragedy occurs then when you are further isolated by people who, in misguided compassion, pity you for all that you can’t do or the pain you must endure, and justify your feelings of worthlessness.

While some people think that they are doing the loving thing by helping their loved one die, what they’re really doing is affirming the other in their fear and misery. How is that loving? Instead, the sick and disabled who ask for assisted suicide should be encouraged to re”bound” from feeling so hopeless and shown what they still have to live for.

As the late, great Fr. Richard Neuhaus beautifully put it: “As long as we are alive, we have all the life there is.” Whether we find ourselves terminally ill, permanently disabled, or facing some other permanent or transitory hardship, there is still some joy to be found amid the struggle. Suicide prevention should not be limited to the able-bodied.

Back aboard the Enterprise. When he’s told by Picard to have some respect for his friend and his Klingon customs, Riker makes another excellent point: “I can respect his beliefs, but he is asking me to take an active part in his committing suicide.”

This is the eyeless “I” of assisted suicide; it does not consider the consequences to others. “Death with dignity” is hailed as an exercise in personal autonomy, but the people claiming this “right” do not act alone. They require assistance — a coarsening of some other person’s conscience.

I don’t have the right to ask or demand something that may hurt others. There is a reason why most doctors oppose “physician assisted suicide.” Their job is to heal, not kill. As Dr. Crusher put it, “the first tenant of good medicine is never make the patient any worse.” You can’t get much worse than dead.

Some will argue that assisted suicide is about alleviating pain, but palliative care in the 21st Century has come so far as to be able to eliminate virtually all physical pain. No, assisted suicide is not about pain control; it’s about the illusion of personal control even over death.

Death is not a right. It is an eventuality that will visit us all. There is nothing dignified about withholding water and food or injecting poison into a person’s bloodstream when they are at their lowest point (or the Klingon custom of taking a knife to your own heart). Death with dignity is not an event; it is the natural result of having lived with dignity.

Finally, I really appreciate how the writers handled the reality of life after a spinal cord injury. More than once it was mentioned that people with SCIs can and do live very “normal”, active post injury lives. It is true and the majority of us with spinal cord injuries (and many other disabilities, for that matter) choose to live with our disability and find that there’s still quite a lot to enjoy about our lives.

That being said, ultimately in the show Worf ended up regaining all of his mobility — through a risky and purely experimental procedure. But, that did lead to a pretty great speech on medical ethics by Dr. Crusher.

This episode of Star Trek was a breath of fresh air to come across after what the entertainment industry has put out portraying this issue in recent years. If you don’t have Netflix, you can watch the episode online for free here.

I wish I could say that this is geekiest post I’ve ever done here, but there is this.

Follow-up: After I originally wrote this article a few weeks ago, I was informed by multiple people about another episode of TNG that seemed to be a little more pro-suicide. See: Star Trek, Pope Francis and TOB for the Aged