After I wrote this post about an episode of Star Trek: The Next Generation that I thought responsibly handled disability and assisted suicide, I was informed by multiple people about another episode of TNG that seemed to be a little more pro-suicide. 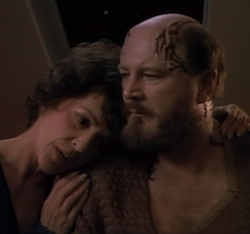 The episode was Half a Life and it involved a planet on which all of its members voluntarily commit suicide at the age of 60 in order to avoid old age, infirmity, indignity, dependence on others, and the cruel uncertainty about when the end would come. I wouldn’t exactly call the episode PRO-suicide at all. Everyone eventually seemed to agree that it was a stupid custom, though they ultimately didn’t do anything to try to end it.

Actually, there are very strong arguments for letting life continue on its natural course, despite the pain and uncertainty that is to come. This time it was Deanna Troi’s mother who was the major champion for the sanctity of life. What is it about those Betazoids? Here is a pretty good exchange between Lwaxana Troi and Dr. Timicin:

“No, no, you’re not cruel to them. You just kill them.” BOOM! “What you’re really saying is, you got rid of the problem by getting rid of the people.” BAM! “What about the responsibility of caring for the elderly?” POW!

As our bodies deteriorate and we lose our independence and control of some of our basic bodily functions, we are still human beings. Our lives still have meaning. This can really be understood in light of John Paul II’s Theology of the Body. While our late pope’s masterpiece is often considered as little more than a teaching on sex and marriage, the TOB is much more. It is JPII’s vision of the human person, as a whole, and what it means to be made in the “image and likeness of God.” Therefore, as Christopher West likes to say, “If you have a body, the TOB is for you!”

Over at Catholic Mom, Cynthia Ann Costello writes on the TOB for the aged:

The body being a gift is one of the major themes of TOB. Initially, we begin to think of the talents we are given as our gifts to the world. Indeed the Gospels teach us not to bury these “gold coins”, but to multiply them for the Kingdom. As we age, however, our culture tends to discard persons who cannot maintain their former level of production. TOB teaches us that we cannot be defined only by what we can offer the world by way of “doing.” This is utilitarianism. Our lives have value simply in “being.” I wanted to encourage this group, that on a deeper level, “you are a gift.” You…. just being you…. is a gift.

Read more as she goes on to explain how our lives continue to be a gift as we age by turning from lives of action to lives of prayer and suffering. And how our crosses, which inevitably increase with age, make us mysteriously part of redemption for the whole world.

Speaking of our duty to care for the elderly, the other day, Pope Francis caused a bit of a stir when he called the loneliness of the old is one of “the most serious of the evils that afflict the world these days.” Kevin Tierney has the full context of the Holy Father’s words and says:

He says that at this moment, the biggest danger is not just unemployment and loneliness, but rather what they signify. What good is a society if they can’t take care of their elderly, and also cannot provide any hope for the future? Everyone is stuck in the tyranny of the present, which is a very nasty and brutish tyranny.
…
The Global Financial Collapse of 2008 changed a lot of what we know about the world. Unemployment has become nearly permanent for the youth, and across the globe the elderly have mostly been abandoned by their families. (Or worse yet, euthanasia.)…As many governments have enacted austerity in the wake of the crisis, the elderly have frequently been a casualty, as their personhood is reduced to numbers in an actuarial table. If you happen to be elderly and poor, well good luck.

In such a situation, it is next to impossible for the Gospel to take root. People won’t look to an eternal home when they don’t have much a chance of surviving in the present.