For the record: I love sci-fi and fantasy as much as the next geek (obviously). BUT, I have never seen an episode of Dr. Who in my life — and I am quite comfortable with that, thankyouverymuch. 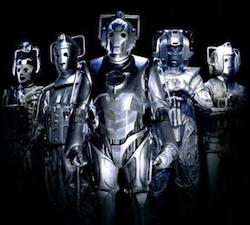 That being said, I did find University of Leicester academic, Dr Chris Willmott’s insight into some aspects of the series quite interesting:

“The therapy/enhancement tension is particularly well examined in the 2006 two-parter ‘Rise of the Cybermen’ and ‘The Age of Steel’. On a parallel Earth, inventor John Lumic has been developing the Cybermen as a research tool as he sought a resolution to how he might survive his own degenerative illness. However the story finishes in a transhumanist’s nightmare when he is forcibly upgraded by his creations.

“Most people would agree that the various Cybermen storylines offer a pretty bleak image of the potential interaction between humans and Posthumans. There are, however, some philosophers who still argue that their ambition for pain-free immortality sits squarely with the goals of many humans. Over the years the details of how humans get turned into Cybermen have varied, but regardless of the mechanics of the conversion process, it has always been clear that the creatures within the shiny suits started out as people.”