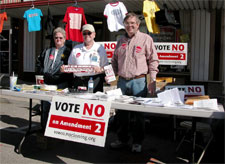 This picture is from the Eldon Turkey Festival earlier today. I went down there to help out my good friend Fr. Fred Elskamp at Sacred Heart parish. It was a pretty good turn out with two pro-life, anti-cloning displays. For some reason the pro-cloning people paid for a spot, but never showed up. But, hey, I’m not complaining.

Well, if you believe the polls, McCaskill is pulling ahead of Talent in the Senate race and support for Amendment 2 is up from a month ago. I’m not sure if I believe the polls, usually I don’t pay attention, but one thing is certain, we’ve got an important three weeks ahead of us. A friend of mine suggested that if each person who opposes Amendment 2 changes the mind of one person on the other side, or convinces someone who is undecided, we win. So, let’s do our homework and get the information out there!

This article from World Net Daily may be of some help: The deception of Missouri’s titanic stem cell initiative 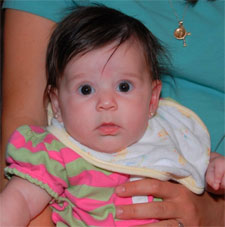 Well, I finally made it back from little trip down south. After going to Naples to see some friends I went over to Plantation to visit my Mom’s side of the family where we have a new cousin, Abigail Rose (pictured here). After leaving Plantation Dad and I headed north to Ocala to see his friend and former business partner. And then up to Georgia, visiting the Zimmerman clan in Newborn. I’ve got lots of pictures from the trip. I will have to see if I can get them online somehow.
So, I’m back! That’s the point of this post. I didn’t do as much posting as I thought I would while I was gone. So, bear with me. I am sorting through all of the information I have missed over the past week (and believe me, there is lots of it) and I will get back on track very soon!

The good bishops of Missouri have issued a letter to all the faithful regarding Amendment 2, most importantly urging us to vote no.

“We Catholics in the State of Missouri must bring our knowledge of the moral truth to bear upon our choices, especially when participating in the democratic process. Our “least brethren” are depending upon us. Our Lord Jesus Christ is depending upon us. We must vote, and we must vote “no” on Amendment 2.”

It’s a beautiful letter and important coming from them as we move into the final weeks before the election.

October is Respect Life Month and here in Missouri we are trying very hard to help ensure that Missourians will continue to respect life by voting no on Amendment 2 this November. At my parish we are relying heavily on the power of the Blessed Virgin Mary and praying the Rosary Crusade Safeguarding Embryonic Human Life, put out by the St. Louis Respect Life Apostolate. Please join us!

I am blogging to you from sunny south Florida right now. I’m in Naples visiting friends of mine at Ave Maria University. I’ve got some free time in my hotel right now, so I thought I’d do a little post (gosh, I sound like my dad – the master blogger).

Well, it has happened…I have been blogged. Yesterday my dad made me aware of a blog called the Kansas City Catholic who got wind of my blog and shared it with his readers. So I thought it would be appropriate to return the favor. So check it out!

I will be out of state for a week, but I hope to have time to do more posts as I travel!

Ms. Magazine, a feminist publication founded in 1972, a year before Roe v. Wade, will publish a cover story titled, “We Had Abortions,” in their fall issue, due out next week. This story will be accompanied by a petition signed by thousands of women who have had abortions in the United States.

The pro-choice, feminist movement is concerned by recent events, such as the abortion ban signed into law in South Dakota last year and the initiative that is on the ballot this November. There is also the question of how the Supreme Court will rule on the partial birth abortion ban challenge, as I mentioned in my previous post.

According to this story, one such woman signing the petition is Tyffine Jones, 27, of Jackson, Miss. who had an abortion 10 years ago so that she could finish high school and go to college. In an interview she said, “I wanted to do something bigger with myself _ I didn’t want to be stopped by anything.” Unfortunately these days, it seems that a woman is supposed to be admired for choosing a career over the life of her child. These women and the voters in South Dakota should be in our thoughts and prayers.

I found this an interesting article: For all the fuss, stem cell study rare in Missouri, highlighting the fact that the stem cell research that Amendment 2 is so apt to protect as a constitutional right isn’t even being done in the state!! And the founders of the Stowers Institute, KC’s big biotech institute, have spent more than $15 million on advertising for the amendment that will guarantee the institute millions in state tax dollars, instead of funding this “life saving research” themselves! Unbelievable.

Here’s another article about a 12 year old girl who was told that she would be punished for reading her Bible during her free time at school: Bible-Reading Student Gets Lesson in Litigation. It doens’t really fit with the other two stories, but I found it appalling.

These yard signs from Missourians Against Human Cloning are starting to go up around Missouri. Here are a few examples from around my hometown of Jefferson City. This one, put up by Alpha and Omega Christian Bookstore, sits next to Missouri Boulevard – probably the busiest road in town. 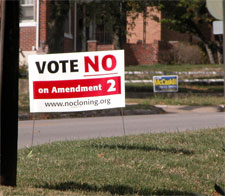 I found this sign in front of an apartment complex just off of West Main – from this angle you can see, in the background, a yard sign for Claire McCaskill, who is in favor of the amendment. I found that kind of ironic since she claims to stand up for “women’s rights” and Amendment 2 would create a huge demand for women’s eggs, and contribute to the exploitation of poor women. 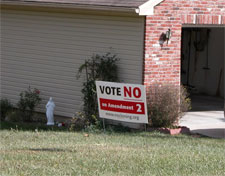 And this is the sign in front of my parent’s house in Holts Summit. We haven’t gotten a Jim Talent yard sign yet, but we’ll get it up there. Jim is very much opposed to the amendment, by the way. If you haven’t gotten a yard sign yet, be sure to call your parish/parish pro-life coordinator. I am sure you can also call MAHC and ask them how you can get your hands on one. I have heard that they really hope to see a bunch of them go up this weekend, so get on the phone and find out how you can participate! 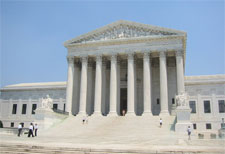 The Supreme Court opens today, but will be delayed due to a few of the Justices observing Yom Kippur. One of the items on their agenda this session will be determining whether the Partial Birth Abortion Ban of 2003 is constitutional or not.

I found this cute little prayer in church a few weeks ago from the Angels for Life: “May the Guardian Angels of the U.S. Supreme Court Justices guide them today.” We should be encouraged to pray this daily.

For more on Partial Birth Abortion see: Priests for Life

Women from all over the world are joining Hands Off Our Ovaries in an attempt to halt egg harvesting for research:

“Women everywhere, from the US to Korea to Australia, are organizing to demand that their health not be sacrificed in the pursuit of scientific stardom, patents, and the quest for new technologies that may or may not turn out to provide treatments for others.”