Dearest readers, I’m afraid my writing/blogging has taken a backseat lately to moving preparations (moving back to Florida next week!!!). Besides all the packing on top of trying to keep up with my other work, the past few weeks have been a marathon of lunches, dinners and drinks with good friends of mine here that I may never see again. Yesterday I had a three hour lunch with one of the hardest working retired priests I know. Please pray for vocations to the priesthood in our diocese. Although Fr. Clarence never complains, our retired priests should not have to be traveling as much and working as hard as he is.

Anyway, I may be slacking off on my writing lately, but several other good people have been doing their part to make the internet a better place with theirs.

One thing I’ve been meaning to share with you is the “Mercy and Killing” symposium that’s been going on over at Ignitum Today, a blog that I contribute to sometimes. The “and” in the title is meant to keep the subject broad – and it has been! Many have chosen to comment specifically on euthanasia and mercy killing and others have taken a completely different approach, talking about just mercy in general and even the death penalty. Click here to see all of the posts in the symposium. I’ve greatly enjoyed reading the articles in this series and I think it’s been an important discussion to have considering how many evil acts are committed today in the name of “mercy” and “compassion.” 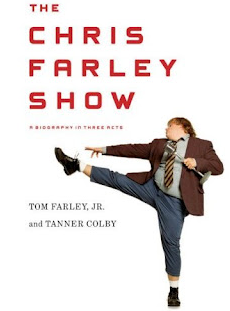 Also over at IT, I really liked this guest post from 22 year old Marine Corps. Veteran Justin Marcel Condreay on Chris Farley and the demons that haunt all of us.

Demons are everywhere. We all have demons. Maybe they’re not as evident as in Mark, but we all have them—we just don’t call them demons.

“I’m afraid!” The demon Fear.
“I don’t feel good enough!” The demon Doubt.
“The things I would do to her…” The demon Lust.
“One more won’t hurt me.” The demon Gluttony.

Personally? Yes. I have my demons. I fight them every single day.

I walk through life with fear. ”Am I doing what God is calling me to do?”

I walk through life with doubt. ”There is no way a loving God would put me through this.”

I walk through life with anxiety, confusion, and sadness. ”What, God? What do you want from me? What’s it all mean, Lord?”

One man that fought to death – LITERALLY – with his demons was one Christopher Crosby Farley, better known as Chris Farley.

Chris Farley is known for his comedy. The fat Chippendale?! Matt Foley the “Motivational Speaker”?! Tommy Callahan in Tommy Boy?! The man was a genius, a legend.

From the outside, things looked great for Chris Farley. Money? Fame? Women? He had it all.

Inside? Inside, Chris was fighting a losing battle with his demons.

What most people don’t know about Chris Farley is that he was a devout Roman Catholic. Chris was a regular in the confessional. Even in the height of his drug addiction, he had a spiritual director he visited regularly. Chris volunteered at countless homeless shelters and nursing homes. He visited many children hospitals, making suffering kids smile.

My absolute favorite book is Chris Farley’s Biography, The Chris Farley Show: A Life in Three Acts. If you haven’t read it, you are missing out. This book makes everyone that reads it a better person.
Of course, I was amazed at Chris’s faith and charity work, but the thing that amazed me most about Chris Farley was his humility.

I regret that the move has been keeping me from regular blogging, but I hope that, once everything is settled, a change in scenery will be just what I need to help the creative juices start flowing a little bit easier. I’ve been trying to just work through it, but I’ve definitely been in a bit of a writing/blogging funk for what seems like a few years now. The motivation has just not been there. Your prayers – for safe travel and a smooth transition (especially for the animals that will be moving with me) – would be greatly appreciated, thanks!