The Tablet has an excellent article from Simi Lampert who explains why donating her eggs seemed like an easy way to make money — until she thought about her family and the fact that she was not only selling her eggs, but also, potentially, her biological children. She begins: 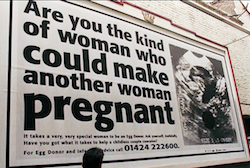 I decided to sell my eggs.

The notion got into my head about a year ago. “Donate” was officially the correct term, because selling eggs isn’t legally allowed, so to skirt around this issue, agencies call it “donating”—with $10,000 given as compensation for the medical processes and physical pain involved in the “donation.” But really, in plain terms, I would be selling my eggs.

Why did I want to do this? Mine was the shameful answer of single moms and young students everywhere: for the money. It seemed like a relatively simple thing to do for the amount I’d be paid. Plus, there was something cool about being able to give someone else the chance to have a child. I imagined a loving couple, happy but for the fact that they couldn’t have a baby without some help. I imagined myself, their savior, descending from nowhere, leaving them with their perfect baby, and then vanishing.

Plus, I really didn’t get why it was a big deal.

On the surface, “donating” gametes seems no different than donating other cells or organs. But, usually kidney donation does not result in the development of a living human organism. It’s easy to think you’re giving up “just and egg” or “just sperm”, but, once donated, those cells are used to create new human life – a very real, unique, human being who is biologically yours. What’s more, in doing so, you are, as Lampert finally realized, deliberately denying your child a connection to his/her biological roots – something that we’re now finding out many donor conceived people wish they had.

If only more women (and men) would think, not about themselves or even the poor, childless couple, but the children they are producing and the effect this might have on them.

On a related note. It was recently reported that a British man who ran a private sperm bank out of his home in the 1970s may be the biological father of as many as 300-600 of the roughly 1,500 children his “clinic” helped produce. The British government has since limited the number of families that can receive sperm from one donor. I don’t know what the magical number is in the UK, but we’re still seeing irresponsibly high numbers of children produced by the same sperm donor in other parts of the world:

Anonymous Donor Daddies: The Kids Aren’t Alright
Shocker: A Biological Connection is Important to Kids, Too
One Man Has 74 Offspring and More Donor Conceived Children Speak Out

One Comment on “News Flash: It’s Not Just Eggs and Sperm That You’re “Donating””