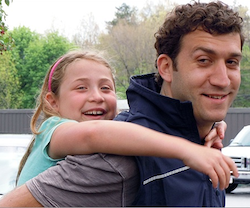 Last month the New York Times reported on a man in California whose donated sperm was responsible for the lives of 150 young men and women. Shortly after, there was a lot of buzz over an episode of Style Network’s documentary show Style Exposed in which Ben Seisler confessed to his fiance (see video) that through the sperm he donated to pay his way through college he has confirmed that he has fathered roughly 74 children (though, according to the Biopolitical Times, he suspects that number is somewhere between 120-140) and more than 15 of them have already tried to contact him. According to the Daily Mail, he donated sperm for three years while attending law school at George Mason, Virginia and earned around $150 per donation (umm…I would hardly call that a “donation”). Seisler is pictured here with one of his biological children.

Upon hearing the news from him, Seisler’s fiance, God love her, told him that what he did was rather selfish and asked, “Did you think of the consequences that would come of it?” No, Lauren, I think it’s fairly obvious that neither he nor the people who supplied his sperm to that many women thought really hard about the possible ramifications of there actions. But, hey, they both got their money and all those women/couples got those babies they were entitled to. And that’s really all that matters, isn’t it?

In related news, even more “donor conceived people” are speaking out about what it’s like growing up having half of their identity deliberately witheld from them.

1. Not only was Alana S. abandoned by her mother’s husband (who played the role of her father while they were married), when the two got divorced, but her biological father was a sperm donor whose identity was withheld from her. “I need you to understand my loss,” she said to her mother when she finally confronted her after years of pent up anger and hurt from growing up without her biological father.

2. All Narelle Grech from Australia knew of her father was that his code name is T5, he is brown-haired and brown-eyed with O-positive blood type. “When I was a teenager, I carried that information around with me on a scrap of paper, the way other kids carried a photograph of their dad,” she says. “It was my way of keeping a link to him because I had nothing else.” Awful. But wait. There’s more.

Grech was recently diagnosed her with advanced bowel cancer, which doctors say may kill her within the next five years. The disease is genetic and she didn’t get it from her mother’s side. Awful. But that’s still not all.

Grech has also discovered that she has eight half-siblings probably living somewhere near him: “Each one may be a genetic time bomb waiting to go off and it’s probable that they don’t know anything about it.” Yep. Awful.

3. Finally, here is a video interview with Damian Adams who, though he had a happy childhood, says he was still frustrated in his teen years when he was discovering who he was as a person, as teenagers do, and realized that he was missing some vital information about where he came from. He’s not upset with his parents or his biological father, he says, but the clinics and the legislation that “facilitated an institutionalization depravation of [his] basic human rights that everybody else is entitled to.” Namely, to know where he came from and his own genetic history.

All three of these people have been searching for years to discover the identity of their biological father, to no avail. In January of this year, Alana launched her own organization, Anonymous Us, to provide an outlet for donor-conceived children to connect and have an open discussion about the realities of artificial reproductive technologies and the resulting family fragmentation.

These revelations have lead many scholars and legislators to discuss imposing tighter regulations on the fertility industry – limiting the number of times a man can “donate” his sperm and making donor registration mandatory – a move that would certainly help lessen the damage. But I still maintain that these problems are an indication that the Catholic Church was correct in her opposition to third party reproduction and the practice should be done away with. It’s not just the violation of the child’s right to know their biological parents, but also of their right to be conceived in an act of love, not to mention the way it has dramatically changed the way we think about marriage and family. Besides, it’s not like this is necessary, life-saving medicine. No one ever died from infertility. And besides, there are safe, effective and, more importantly, ethical alternatives in fertility care.