Lawmakers in Minnesota have proposed legislation to make human cloning illegal throughout the state. Good for them! I hope they have better success than we did in Missouri a few years ago (see this post for an explanation of that disaster).

It is a common misconception among Americans that our country prohibits human cloning. But, then, most people also think there is a ban on embryonic stem cell research that was enacted during the Bush administration. Sadly, neither of those things are true. *Sigh* How I wish we were more like Germany! Wait. What? Did I say that out-loud? Well, I do. At least in one area. Not only does Germany prohibit human cloning, but they have a law limiting the number of embryos that can be created outside the womb via IVF and requiring that each of those embryos be implanted – so no “leftover” embryos sitting around for scientists to get greedy over.

Now, I don’t think that policy in the United States should be determined by the example of other countries, but, hey, when they’re right, they’re right and Germany has it right when it comes to cloning and they’re not the only ones. Here is a chart that Rebecca Taylor compiled from BioPolicyWiki on the regulation of reproductive technology in various countries compared to the United States (click to enlarge): 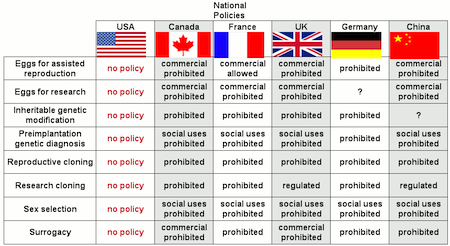 Remember, we’re no longer talking hypotheticals with regard to human cloning. Here in America, we know scientists in California successfully cloned fully human, as well as human/animal hybrid, embryos and, as Minnesotans discovered, scientists are trying to expand on this research in labs all over the country. Scientists are also seeking approval from the U.S. Food and Drug Administration to clone 3-parent embryos (which has been done in the UK) and bring them to term!

Wake up and smell the clones, people! When it comes to legislation, a ban on cloning at the federal level should be as much of a priority for pro-lifers as defunding Planned Parenthood is right now, if not more so! We need to put an end to this kind of experimentation before it gets even more terrifying – before we’re forced to work within a legal system that, like abortion, recognizes such research as a constitutional right, and only allows us to limit the harm done with restrictions on government funding and other minor regulations.