I’m with Rebecca on this one. I understand the importance of fighting the Freedom of Choice Act, but we’ve got to make sure we stay focused on the big picture here. Few people are really talking about (or even know) what is going on in science labs not just around the world, but right here in our own country. They aren’t exactly hiding it. We just need to start paying attention.

Early last week U.S. based Advanced Cell Technology made headlines with their report on the Reprogramming of Human Somatic Cells Using Human and Animal Oocytes. Do you realize what this report tells us?! Through this report we have learned that scientists right here in America have been seriously tinkering around with human life in ways that were once unimaginable – in real life, anyway! Not only have they been experimenting with human/animal hybrids, but in the process they have cloned several fully human embryos as well.

What seems to have stood out most in this report is the apparent “failure” of the human/animal hybrid embryos. Unfortunately this was not a failure in actually making human/animal embryos. The failure was when these cloned embryos would not grow to a “medically useful” stage or reproduce the necessary genes. Here is a nice visual for you: 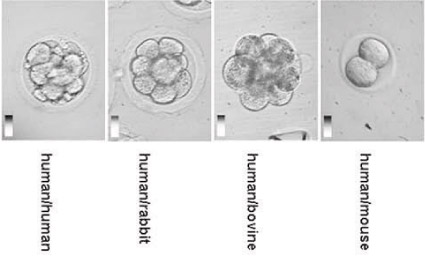 As Rebecca told her readers:

“I have just posted a picture of a human-bovine embryo. You have just seen one. Let that marinate.”

I’ve seen much dutiful reporting on the results of ACT’s studies, but very little outrage over the fact that such horrifying experimentation has been going on in the first place. This is the stuff of science fiction, folks, and it’s happening now in the real world! And the worst part about it is that here in America it’s all perfectly legal! I thought I had read that the numbers were in the thousands (maybe thousands of attempts?), but below is a table from the report that seems to break down how many embryos were cloned and how far they developed:

They also made a number of IVF embryos as controls.

Now, the real story here, as Beverly Nuckols of Life Ethics also points out and only a few news outlets have picked up on, is the fully human cloned embryos. According to their report, ACT scientists created about 50 cloned human embryos inside of whom they discovered several thousand active genes – genes which were silent in their hybrid counterparts. And although these cloned embryos also only lived for a short while ACT’s scientific director Robert Lanza is hopeful for their use in the future:

Science has a way to go with both of these (cloning and research with IPs cells), but we will soon have a way to create a bank of stem cells to expand the range of stem cell therapies”

Wake up and smell the clones, people! We must put an end to this kind of experimentation before it gets even more terrifying. I’m getting chills just writing about this stuff.

It is way past time for the U.S. to ban human cloning – all of it, even for medical research. If liberal countries like France and Germany can do it there must be some way to get it through here (though I won’t exactly be holding my breath).

News stories:
Research Breakthrough: Human Clones May Be Genetically Viable
It Is Easier to Clone a Human Than to Blend One With an Animal
Human Clones: One Step Closer

8 Comments on “Why We Need to Ban Cloning – ASAP!”