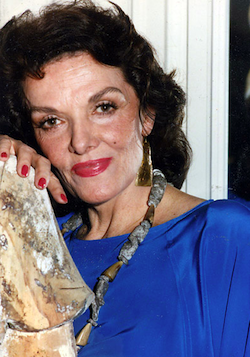 When I read the news of the passing of actress Jane Russell (The Outlaw, Gentlemen Prefer Blondes) yesterday, I had no idea that she was a pro-life activist. This morning I came across her obit by John Rogers of the AP which says:

In lieu of flowers, the family asks that donations be made in her name to either the Care Net Pregnancy and Resource Center of Santa Maria or the Court Appointed Special Advocates of Santa Barbara County.

Intrigued, I headed over to IMDB to see what they had on her and, sure enough, under “trivia” it says:

A longtime pro-life activist, she opposes the use of abortion in any circumstance including rape or incest.

And it quotes her as saying:

People should never, ever have an abortion. Don’t talk to me about it being a woman’s right to choose what she does with her own body. The choice is between life and death.

According to her autobiography, Russell was unable to conceive children as a result of an illegal abortion at age nineteen. She and her first husband, American footballer Bob Waterfield, adopted three children. In the early 50s she campaigned on behalf of the Federal Orphan Adoption Amendment of 1953 (which allows the children of American servicemen born overseas to be placed for adoption in the U.S.) and in 1955 she founded the World Adoption International Fund, an organization that has helped find homes for more than 51,000 babies.

She was, apparently, a deeply religious woman with very conservative political leanings, describing herself as, “a mean-spirited narrow-minded right-wing, conservative Christian.”

Eternal rest grant unto her, O Lord, and let perpetual light shine upon her forever. May her soul and the souls of all the faithful departed, through the mercy of God, rest in peace. Amen.

*UPDATE* LifeSiteNews has an exclusive with Russell’s daughter-in-law.