The most popular person on Facebook today hasn’t even been born yet. In order to keep their family and friends updated on their first pregnancy, an Australian couple joined the social 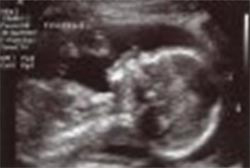 networking group. Instead of putting their profile in either, or both, of the couple’s names, they turned it into a profile for their unborn child – “Bubba” – using the child’s ultrasound as it’s profile pic. Bubba, however, is fast receiving friend requests from all over. The couple reports over 100 already. I’ve been on Facebook for almost two years and I’ve only got about half that! This story has been picked up on several news outlets outside of Australia already. It’s great to see the humanity of the unborn recognized so widely. Though Fox News had to add this little comment:

At present, 25 people are listed as the baby’s “friends”, but publicity surrounding the profile has prompted others to come forward and apply to be part of Bubba Waring’s (as yet unstarted) life*.

Nice try, but I think it’s pretty clear that this little child’s life has already started.

*It looks like that line was an add in on Fox’s part. The line from the original story they took it from reads:

So far, 25 people are listed as the baby’s “friends”, but publicity surrounding the profile has prompted others to apply to share in Bubba Waring’s journey.

4 Comments on “World’s Most Famous Fetus”