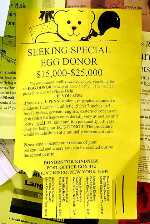 And you thought advertising for egg donations on college campuses by fertility clinics was bad enough. Now women will be coaxed into undergoing this dangerous and potentially deadly procedure in the name of science!

Women “will be paid £250 plus travel expenses, the existing maximum compensation for any egg or sperm donor.” But don’t worry, lest you think the women are doing it just for the money, “Anyone agreeing to donate will have to show that they are acting for altruistic reasons, for example because they have a close relative suffering with one of the conditions scientists are trying to develop new treatments for with the aid of human eggs.” WHEW! That’s a relief.

They’re also apparently signing up to potentially be a martyr for the cause since the drugs that they use to hyperstimulate the ovaries “were found by the scientists to cause paralysis and could lead to limb amputation and even death.” Actually this little fact will most likely be downplayed as meaningless if mentioned at all. And let’s not forget the potential exploitation of poor women, despite attempts to ensure that women doing this would do so for purely altruistic reasons – gimme a break!

Visit: Hands Off Our Ovaries