This coming January 1 is World Day of Peace 2007. Vatican officials have released the text of Pope Benedict’s speech in which he maintains that true peace cannot be achieved as long as the killing of unborn children is accepted:

“’Respect for people promotes peace,’ the pope said in the statement as he stressed ‘the duty to respect the dignity of each and every person.’
…’The duty to respect the dignity of each human being, in whose nature the image of the Creator is reflected, means in consequence that the person cannot be disposed of at will’
…’Alongside the victims of armed conflicts, terrorism, and various forms of violence, there are those silent deaths provoked by hunger, abortion, experiments on embryos and euthanasia,’ he added. ‘How could all this be seen as anything other than an attack on peace?’
‘Abortion and embryonic experimentation constitute a direct denial of that attitude of acceptance of others which is indispensable for establishing lasting relationships of peace,’ the pope concluded.” 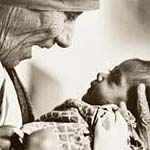 In 1994, Mother Teresa mentioned this very thing at the National Prayer Breakfast in DC:

“the greatest destroyer of peace today is abortion, because it is a war against the child, a direct killing of the innocent child, murder by the mother herself.
And if we accept that a mother can kill even her own child, how can we tell other people not to kill one another?
…Any country that accepts abortion is not teaching its people to love, but to use any violence to get what they want. This is why the greatest destroyer of love and peace is abortion.

Indeed, peace will not be achieved while we accept the killing of innocent human life.