Embryo custody battles are on the rise. Except, legally speaking, they aren’t really “custody” battles — in the traditional sense of the term. They’re more like property disputes. 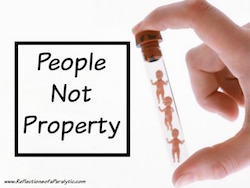 I was very pleased recently to find out that Missouri Right to Life has gotten together with a few other pro-life organizations to file an amicus brief in the case of McQueen v. Gadberry in Missouri Court of Appeals.

The pro-life groups are working on behalf of Jalesia McQueen, who wants to implant and give birth to the remaining two embryos that she and her ex-husband made while they were still married. She is appealing a Trial Court ruling, which ordered that the embryos must stay frozen unless and until both parties can agree on what to do with them. They also ruled that the embryonic children are marital property — though of a “unique type,” because what one party does with them in the future (the mother) may impose unwanted obligations on the other (the father).

In the latest episode of BioTalk, I spoke with my good friend Jim Cole, who is the General Cousel for Missouri Right to Life and who was responsible for editing much of the brief.

I also spoke with Mike Allen about it on his show last week:

You can read the entire brief here, and I highly suggest you do if you have time (I’ve never read a legal brief before — it’s not as difficult as I thought it would be).

The constant theme throughout is what is in the best interest of the (embryonic) children involved. And that is the ironic legacy of IVF: that couples are so desperate for children to love and yet concern what’s good and right for the children themselves is actually put last.

The Trial Court ruled against Jalesia McQueen obtaining and implanting her own embryos citing her ex-husband’s “right not to procreate.” Which is, of course, ludicrous, since procreation has already taken place.

Science establishes — and Missouri Law agrees — that a human being begins at fertilization. “Once procreation has occurred and human life has begun,” the brief states, “the rights and interests at issue can no longer be framed solely as the procreative or reproductive interests of the parents.”

America has a sordid history of defining certain classes of human beings as property. Let’s not go down that road again.