Yesterday Major League Baseball announced that it will be suspending a dozen or so players for performance-enhancing drug use. This list includes one of the leagues most well known and highest paid athletes. 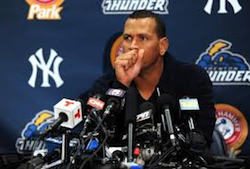 Good. I hope we see more of this.

I don’t know about you, but I’m sick of hearing sports commentators belittle the importance of even trying to discourage/crack down on PED use now that it has become so widespread among athletes — in all sports. The argument — at least that I’ve heard — being that it’s so widespread that there’s no stopping it at this point, so these suspensions, fines, etc… are relatively meaningless. Besides, once “everybody’s doing it”, who are these athletes really hurting anymore, anyway?

On the surface, it may not seem like a huge deal to some, but in episode 3 of BioTalk, Rebecca and I discuss how PED use relates to the transhumanism movement as well as what its acceptance may mean for our kids and how they view sports.