1. Responding to an H+ article by Belinda Silbert, Wesley Smith comments on how Transhumanists Want to Be Gods:

Transhumanism is a collective of (mostly) naked materialists who hope science and technology will replace the deeper meaning they lost by rejecting metaphysical beliefs. Transhumanists harbor futuristic dreams of making themselves immortal and possessing what would now be thought of as superpowers through technological recreation. Toward those ends, they spend a lot of time and energy discussing and debating arcane issues such as the ethics of uploading consciousness into computers and living forever.

I find it all rather sad. And worrying. Transhumanism harbors blatantly eugenic ambitions and as part of its theology (more on that in a moment) it angrily rejects human exceptionalism. For example, one of the movement’s high priests, J. Hughes, has yearned to enhance a chimp into human attributes to prove we are not special.

I used the word “theological” above because in many ways transhumanism is a quasi religion. It has dogma, eschatology, and yearns for a material New Jerusalem of immortal life.

2. Speaking of chimps. On the one hand, Transhumanists are all about transforming humanity. On the other hand, they also seek to redefine what it means to be a person, extending personhood rights to any kind of intelligence, artificial or otherwise. Recently Spanish Prime Minister Mariano Rajoy signed a law granting human rights to great apes:

It is now safer to be a monkey in Spain—at least if you’re one of the larger species—than a man. Thanks to a new law passed by the Spanish parliament and signed into law by Prime Minister Mariano Rajoy, the Great Apes are protected from the moment of conception against abortion and fetal experimentation. Human embryos, on the other hand, remain unprotected and the subject of scientific research. 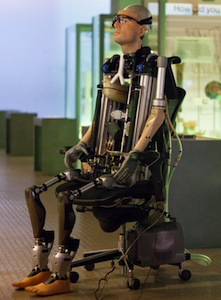 3. No doubt, when most people think of “transhumanism” they think of literally infusing the human body with all kinds of nanotechnology. In London a bionic man complete with artificial organs, synthetic blood and robotic limbs has gone on display at the Science Museum. At the Public Discourse, William Carroll talks about “Rex” and why it is impossible for any machine to be a human being.

The bionic man can hear through cochlear ears, see with the aid of a bionic eye, has speech software (similar to Stephen Hawking’s) for verbal responses, and a rudimentary kind of artificial intelligence. Nearly all these developments come from advanced electrical engineering that connects to or mimics electrical signals from muscles and nerves.

Is the Bionic Man Human?

To speak of the bionic man’s being able to “hear,” “see,” and “talk” raises philosophical questions about whether the bionic man is truly performing “human” functions.

4. All of this ties in nicely to the latest episode of BioTalk in which Rebecca Taylor and I talk about transhumanism, performance enhancing drugs & the purpose of sport. If you’ve got kids involved in sports, you may want to start talking to them about these things.