Over at Catholic Lane last week we published two articles from women describing their experiences with so-called Catholic doctors and hospitals acting…less than Catholic. See:

Sadly, their experiences are not unique. One famous example is Christ Hospital or Advocate Christ Hospital and Medical Center in IL where pro-life speaker/blogger Jill Stanek says she witnessed doctors not only performing late-term abortions, but also abandoning some of the babies who survived abortion attempts. 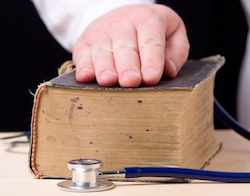 Jill and Stacy’s experiences especially remind me of something one of the speakers said at a recent pro-life conference on advances in prenatal diagnosis: doctors and hospitals are often forgotten or left out of the abortion debate. And it’s true!

So much of our time and energy is focused on Planned Parenthood and “abortuaries” and we forget that it’s often legitimate doctors and health care facilities that refer for abortions and commit them themselves. In fact, prior to Roe v. Wade, it is my understanding that this is where many, if not most, of the illegal abortions were committed. Not in “back alleys” by untrained hacks, but in hospitals by doctors who would then “doctor” the paperwork when describing the “treatment” they were providing. That’s what the early 70s crime drama The Carey Treatment was centered around.

Once upon a time physicians and medical professionals — believers and non-believers alike — swore an oath to recognize and uphold the dignity of their patients, born and unborn, and “never do harm” or administer deadly medicine to anyone — even when asked to do so.

Now, not only do we not require such an oath to be taken anymore, but for those who do take it we’ve changed it into something more politically than medically correct. Any reference to never administering deadly medicine has been removed and replaced with a vague pledge to “tread with care in matters of life and death.”

To all you med students out there, you who are the future of health care, whether you’re Catholic or not, I implore you: learn and practice the good medicine! Do not give in to the moral relativism of our day. Killing is not care, no matter who you’re killing or what reason you have for killing them. This applies to end of life care as well.