Cloning hasn’t been in the news for quite some time, but that doesn’t mean that it’s not going on right now. Recall: we did not find out when the first embryos were cloned until after scientists wrote a report about their experimentation that had been going on for probably years. If nowhere else, we know it’s definitely going on in South Korea where Professor Park Se-pill at Jeju National University announced last year that he is striving to harvest embryonic stem cells from human clones by 2015. 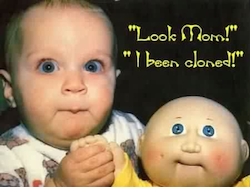 As unfunny as the manipulation and destruction of human life for scientific research is, it’s good to keep a (tasteful) sense of humor about things, lest we die from the sheer injustice and inhumanity of it all. Last Sunday, the Miami Harold re-ran a classic Dave Barry column having a little fun with the concept of human cloning. I’ve posted this here before, but it’s even more relavent now that scientists have actually succeeded in cloning human embryos (along with human/rat, human/bovine, human/rabbit embryos and embryos with 3-parents):

Human cloning: Will it be a lifesaving scientific advance, like penicillin? Or will it prove to be a horrible mistake that unleashes untold devastation upon humanity, like the accordion?

As American citizens, we need to form strong opinions about this issue, so that we can write letters to our congresspersons, so that their staffs can, as a precautionary measure, burn them. But first we must inform ourselves by asking questions and then answering them in the ”Q” and ”A” format.
…
Q. Oh, OK. What is cloning?

A. In scientific terms, it is a procedure by which a theoretically infinite number of genetically identical organisms emerge, one at a time, from a Volkswagen Beetle.

A. Whoops! Our bad! Cloning is a procedure whereby scientists, using tweezers, manipulate DNA, which is a tiny genetic code that is found in all living things as well as crime scenes that have been visited by O.J. Simpson. A single strand of DNA can be used to create a whole new organism, as was proved when scientists at Stanford University took DNA from the fingernail of a deceased man and grew a six-foot-tall, 190-pound fingernail. Unfortunately, it escaped from the laboratory and held police at bay for hours by screeching itself against a blackboard. It was finally subdued by National Guard troops equipped with earplugs and a huge emery board.

Read the whole thing, have a good laugh and then pray for an end to this monstrosity before it becomes an even bigger nightmare.