Generally speaking, I agree with Archbishop Chaput, who said in his book Render Unto Caesar: 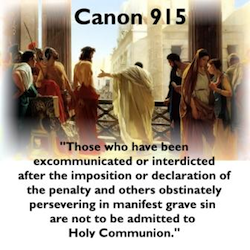 If Catholic political life is dominated by bickering over who will or will not be denied Communion, the real issue will be overlooked. The real issue is this: Many of the same American Catholics who are successful, assertive and professionally well educated in their secular lives really know very little about the church, their faith, and what being “Catholic” requires. As long as that continues, we’ll have petulant clams of conscience and equally petulant demands for punishment. (p. 227)

But, I’m mad as hell and I just can’t take it anymore. For the good of souls (not the least of which being her very own), the time to hesitate on publicly acknowledging Nancy Pelosi’s excommunication is through. It is absolutely scandalous (to say the least) for this woman to continue to publicly claim to be a Catholic in good standing and then have the gall to publicly say things like this:

Pelosi talked about the importance of women’s health, and then said, “Yes, I think that all institutions who cover, who give, health insurance should cover the full range of health insurance issues for women.”

Read more – if you can stomach it.

The very mandate that Pelosi is defending is an unprecedented assault on religious liberty in this country and every single U.S. Catholic bishop has now made some public statement condemning it. Quoting Canon lawyer Ed Peters from earlier this month:

It’s now February of 2012, and nothing in Pelosi’s conduct over the last 23 months suggests any emendation of her attitudes toward killing unborn babies, etc., etc., etc. Indeed her recent call for Catholics qua Catholics to unite behind, of all things!, President Obama’s plan to impose immoral policies on private medical insurance plans…suggests that Pelosi’s views, like Pharaoh’s heart, have only hardened with time.

You know, I used to think Pelosi was just profoundly ignorant when it came to Catholic teaching, but but at this point the woman clearly knows what the Church teaches and chooses to defy it in favor of her own false theology. In which case, it’s not so much ignorance as it is arrogance. She excommunicated herself a long time ago, it’s now time for her bishop to acknowledge it – publicly.

Pray for her – and her bishop.

Ok. That’s really all I have to say about that. If you want more, check out: Fr. Z, Ed Peters and The Crescat

3 Comments on “Public Acknowledgement of Pelosi’s Excommunication: The Time to Hesitate is Through”