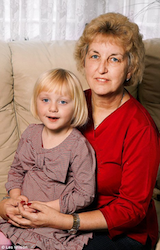 Using her partner’s sperm and a donor egg, Susan Tollefsen became Britain’s oldest first-time mother when she gave birth at the age of 57 and sparked an ethical fire-storm. Now, 61 and separated from her partner, she says there should be an age limit for IVF treatment for women in the UK.

‘Freya (her daughter) is without doubt the best thing I have ever done in my life, and I have no regrets. But with the benefit of hindsight I recognize that perhaps some of my critics were right.

‘I get a great emotional feeling when I look at her, and a sadness when I realise time’s running out. If I could change just one thing, I would wish to be younger so I could enjoy watching Freya grow up, get married and have children of her own.

‘If I’m completely honest, my experience has taught me that 50 should probably be the cut-off limit for having children, but until you have them it’s almost impossible to appreciate that.

‘It’s so true that you only learn by your own mistakes, and my mistake was not to have had her sooner.’

It’s still pretty rare, but more and more women today are taking advantage of modern reproductive technologies to have children long after their reproductive cycle has ended. Third party reproduction is always a controversial topic, but this brings it to a whole new level.

I won’t be able to watch it, but today Jennifer Lahl, founder and president of The Center for Bioethics and Culture Network (and one of my pro-life hero’s), is supposed to be on Dr. Oz’s television talk show to discuss reproductive technologies and the question, “how old is too old?”:

IVF is risky business at any age, but I’m sure the risks are much higher the older you are.

Besides the woman putting her own health at risk, she is also seriously risking the health of her future child. That is, of course, if she’s lucky enough to actually give birth at all.

For women over 35, the percentage of IVF cycles that result in the birth of a child averages somewhere around the mid 20s – a rate that gets considerably smaller and smaller as you get older. Most women will go through multiple cycles before an embryo will even attach itself in the womb, let alone survive until birth – and these suckers aint cheap.

Not only do they cost each woman/couple tens, if not hundreds of thousands of dollars, but they come at the expense multiple human lives. When it comes to IVF, the number of lives lost, destroyed or ‘frozen in time’ significantly outweighs the number of human beings actually living outside the womb as a result of this technology. According to recent numbers more than thirty embryos are created for every successful birth by IVF.

How old is too old? If you ask me, IVF is wrong no matter what age you are. But, when it comes to older women, especially, there’s a reason a woman’s reproductive cycle ends when it does, and we would do well to respect the laws of nature in this regard.

One Comment on “IVF: How Old is Too Old?”