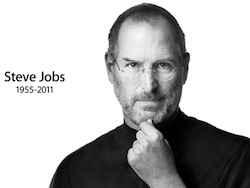 “It started before I was born. My biological mother was a young, unwed college graduate student, and she decided to put me up for adoption. She felt very strongly that I should be adopted by college graduates, so everything was all set for me to be adopted at birth by a lawyer and his wife.

Except that when I popped out they decided at the last minute that they really wanted a girl. So my parents, who were on a waiting list, got a call in the middle of the night asking: “We have an unexpected baby boy; do you want him?” They said: “Of course.” My biological mother later found out that my mother had never graduated from college and that my father had never graduated from high school. She refused to sign the final adoption papers. She only relented a few months later when my parents promised that I would someday go to college.”

And the rest, as they say, is history. 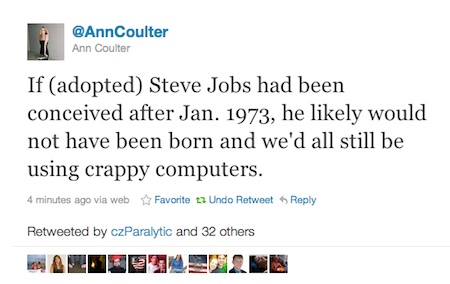 Now, of course we can’t say for sure that he would likely not have been born, but the chances of it would have definitely been higher, especially if his biological mother had asked Planned Parenthood what she should do. Cassil ends his Times piece with a very fair and poignant question

Out of the 52 million abortions in the US in the past 38 years, how many other Jobs’s have we extinguished?

Some hard-core abortion advocate might come back at this question with something like, “yeah, and how many Hitlers have we avoided? etc…you never know how each child will turn out in the end.” But that’s the point, isn’t it? Jobs’ story is a reminder that every child at least deserves a chance at greatness.

Eternal rest grant unto him, O Lord, and let perpetual light shine upon him. May he rest in peace.