Up to 40 percent of premature births are caused by a rupture in the membrane surrounding the foetus, causing labor. Babies born before 24 weeks have a poor chance of survival while later babies are at higher risk of birth complications. 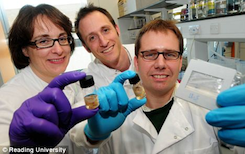 Previous attempts to treat this problem have not been successful, but some UK researchers are hoping that they’ve finally found the answer. A team from the Reading school of pharmacy have successfully developed sac membrane in the lab using stem cells from placentas obtained after births and created a ‘repair’ patch designed to be placed over the rupture using keyhole surgery. Dr Che Connon, who published the findings in the journal Tissue Engineering, told the UK Daily Mail,

‘We were able to manipulate the cells to make a material that is almost the same as a woman’s natural membrane.

‘It is tough and we are confident it would do the job and hold a pregnancy in place.’

And Dr Anna David, a consultant obstetrician and expert in premature birth at University College of London Hospitals Trust, said:

‘If we could use these membranes then we would be able to preserve pregnancies and save women from losing their babies.

‘This would be particularly beneficial for women whose membranes rupture before 24 weeks as the chances of these babies surviving are not very high. Before 20 weeks their lungs are simply not viable.’

Using non-embryonic stem cells to help save unborn babies? Come on. It really doesn’t get more “pro-life” than that! Dr Connon believes human trials will start in two years’ time and the treatment could be introduced by 2016.

One Comment on “Possible Stem Cell Treatment for the Unborn!”