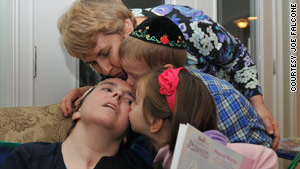 Last year I highlighted the story of Abbie Dorn (shown here with her mother, niece and nephew in 2010), a mother who was severely brain damaged after giving birth to triplets. Her story is terrible on a few different levels. As if it wasn’t bad enough that Abbie’s husband, Dan, abandoned her not long after her brain injury, which left her largely unable to move on her own or communicate (So much for “in good times and in bad…in sickness and in health”). He also stopped bringing her babies to visit her – the children she sacrificed her own body to give life to – and a bitter battle between Dan Dorn and Abbie’s parents, who have been caring for her much like the Schindlers wanted to care for Terri Schiavo, about the right she has to see her own children has been waging ever since.

But now it seems there may be a silver lining to this dark, cloudy story:

A Los Angeles County Superior Court judge ruled Friday that a paraplegic woman who communicates by blinking has the right to see her 4-year-old triplets.

In a tentative 10-page ruling, Judge Frederick C. Shaller said that Abbie Dorn, 34, can see her daughter, Esti, and sons Reuvi and Yossi, for a five-day visit each year pending a trial in the acrimonious custody case. She also entitled to a monthly online Skype visit. A trial date has yet to be set.

It’s a small improvement, but I pray that this tiny glimmer of hope will lead to an even brighter future with expanded visits as time passes.

Most everyone talks about “parental rights” in this case – whether Abbie, or other severely disabled parents for that matter, has a constitutional right to see her children. Of course she does. But let’s not forget about the rights of the children to see their mother. There are very few “rights” that I think children have, but to know and have a relationship with each of their parents is certainly one of them. This woman is not abusive. She’s not a drug addict or a convicted felon. She’s disabled, and seeing her in such a condition does not present any kind of threat to them, however small they are. Dan Dorn thinks that seeing Abbie would be too traumatic for them at the moment, and has said that he is not opposed to the triplets choosing to see their mother in the future, whenever he determines they are old enough to make such a decision. But, these children deserve to know the living, breathing woman who sacrificed her own body to give them life…now. Before their judgment is clouded by modern society’s view of beauty, happiness and “quality of life.” They will grow up as better human beings for it.

When his ex-wife would bring their young children to see him regularly after a major stroke left him paralyzed from head-to-toe with locked-in syndrome, Jean-Dominique Bauby discovered, as his daughter lavished his face with kisses one Father’s Day, that “…even a rough sketch, a shadow, a tiny fragment of a dad is still a dad.” Indeed. The same goes for mothers in similar situations. Said Judge Fredrick Shaller in his ruling last month:

“They can touch her, see her, bond with her, and can carry these memories with them.”

No, Abbie Dorn cannot feed her kids, hold them or otherwise “interact” with them. She may not even be aware that they are there at all (though, no one an know that for sure). But, she’s still their mother and that counts for something.

2 Comments on “Abbie Dorn: a Glimmer of Hope and Prayers for an Even Brighter Future”