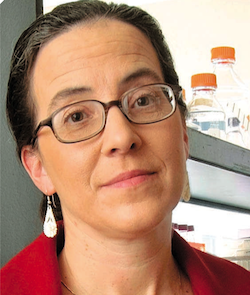 Alright! I finally got around to reading this entire feature in Nature about cellular physiologist Theresa Deisher…and this woman is my new hero. She used to be “very left-wing,” especially when it came to life issues, but now Deisher is an “adamant right-to-lifer” fighting against embryonic stem cell research…in court!

First, her mind was changed about the moral status of the unborn when she encountered the cadaver of a woman embedded in formalin that very much resembled an “alien” looking fetus she saw years before in a pathology lab during a summer job in Sweeden- an experience that, at the time, convinced her that the unborn were not sentient, soul-bearing human beings. This new realization, that the corpse of a grown woman could be so similar to that of a fetus – a “thing”, as she called it – opened up what she calls “a long, slow process” of coming back to the faith of her childhood. A faith she had once shunned in favor of science.

“It’s very difficult to get passion- ately, morally protective of what physically truly is a clump of cells,” she says. “But that is a human being. Scientifically, you can’t debate that.”

Then Deisher became the first person world-wide to identify and patent stem cells from the adult heart which differentiated, she says, into cell types including heart muscle, skeletal and smooth muscle, connective tissue, skin, bone and cartilage. “It was mind-boggling what these cells became,” she said. That was in 1995, well before the first report that human embryonic stem cells had been isolated and, yet, it was still met with “ferocious hostility.” One scientist even cornered her, yelling, “Adult stem cells do not exist out- side the haematopoietic system! Who the blank do you think you are, God?” and Deisher was ordered to stop working on the cells. This opened her eyes to what she says are the very real — and unscientific — passions that can infect defenders of scientific orthodoxy and it lead her “deeply and profoundly” back the faith she had abandoned as a young scientist.

So, she left her former biotech firm and began accepting invitations to speak about stem cell research – about the trouble with embryonic cells and the real benefits of using ethical alternatives. At one event in 2007 she spoke alongside a mother who had adopted a frozen embryo from a fertility clinic. Her daughter, no longer an embryo, stood beside her and Deishler was mesmerized. It was for her “the turning point to become less scientific about it, and actually feel emotion, and a stronger sense of commitment”. She is now, as I said earlier, an “adamant right-to-lifer” – who rises as early as 3:45 a.m. to ride an exercise bike while praying the rosary!

Since then, Deisher helped found a firm in Seattle called AVM (‘Ave Maria’) Biotechnology which is dedicated to developing adult-stem-cell therapies and alternatives to vaccines and therapeutics made using cell lines from aborted fetuses. She is also a plaintiff in the legal case against the NIH guidelines for ESCR funding. A case that is currently being held up in two courts: the higher court, the Court of Appeals for the District of Columbia Circuit, which resides one level below the Supreme Court, is considering whether Lamberth met the legal standard for granting the preliminary injunction.

Despite all the opposition she encountered early on in her career, Deisher says the biggest lesson she has learned from the lawsuit is “how many scientists are against [human-embryonic-stem-cell research]. I did not know that. I did not expect the level of support and encouragement that I have received.” Great! Hopefully she’s encouraging them to be more vocal about it.

The stem cell issue has not been much of a hot topic lately. But, just because there is not some major “breakthrough” in the news or stem cell related legislation being considered doesn’t mean that it has gone away or that it’s not being conducted. Actually, because we rarely hear about what kind of studies are going on until after the scientists put together and publish a report about their findings, I shudder when I stop and think of how many human lives are being created, manipulated and destroyed in science labs throughout the country and the world right now! Here in America, there is no ban on ESC research and, while there are still some limits on federal funding for research involving human embryos, many states do appropriate hundreds of thousands of dollars to it.

One Comment on “This Woman is My Pro-Life Hero”