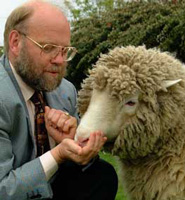 The scientist who cloned Dolly the sheep has announced that he will no longer pursue a license to clone human embryos:

Prof Wilmut, who works at Edinburgh University, believes a rival method pioneered in Japan* has better potential for making human embryonic cells which can be used to grow a patient’s own cells and tissues for a vast range of treatments, from treating strokes to heart attacks and Parkinson’s, and will be less controversial than the Dolly method, known as “nuclear transfer.”

His announcement could mark the beginning of the end for therapeutic cloning, on which tens of millions of pounds have been spent worldwide over the past decade. “I decided a few weeks ago not to pursue nuclear transfer,” Prof Wilmut said.

Most of his motivation is practical but he admits the Japanese approach is also “easier to accept socially.”

This just reinforces what we’ve been saying all along. Not only is human cloning unethical, but it is, probably 100%, unnecessary. Private investors have been picking up on this for years, hence the need to force the public to dedicate millions to unethical research through the government. Scientists are even catching on as well. Researchers in California finally had to admit to voters that any progress in the area of cloning experimentation would be at least a decade away, probably more, if ever.

But what about the American public, specifically in the areas of politics and the media? The fact that this story, out of the UK, hasn’t gotten picked up by any major American media gives us a clue. In recent years human cloning and embryonic stem cell research have become as much of a political issue as health care and national security. Voters in California approved spending billions of state dollars on such research while NJ voters just rejected a $450 million ESC research campaign. In this year alone congress twice sent a bill to the president that would expand funding for ESC research. And who can ever forget Missourians voting to protect human cloning in our State’s constitution?

All of these measures were aided by a media eagerly willing to repeat the propaganda promulgated by a rabid pro-cloning biotech industry. Deceit and manipulation is the name of the game. Basic scientific terms are redefined to hide their true meanings and fool the general public. Images of sick children and people in wheelchairs are used in ad campaigns for emotional manipulation. Michael J. Fox has made a second career, of sorts, out of using his disability (sometimes manipulating it for dramatic effect) to promote human cloning/ESC research as the ONLY hope for the future of stem cell research. Do you think these people will ever open their eyes to the REAL future of stem cell research that Dr. Wilmut has discovered?

When the most famous cloning scientist in the world come out, just days after a “major breakthrough” in cloning, and says that he will forgo embryo destructive research in favor of something more promising we should all pay attention. We should also examine the motives of those who continue to pursue such research despite the growing evidence against it’s ultimate effectiveness.

* This would be the method of reverting skin cells into ESCs