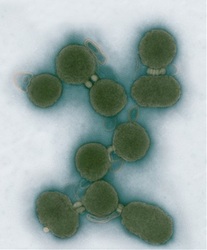 Researchers at the J. Craig Venter Institute have developed the first living cell to be controlled entirely by synthetic DNA:

The researchers copied an existing bacterial genome. They sequenced its genetic code and then used “synthesis machines” to chemically construct a copy.

Dr. Venter told BBC News: “We’ve now been able to take our synthetic chromosome and transplant it into a recipient cell – a different organism.

“As soon as this new software goes into the cell, the cell reads [it] and converts into the species specified in that genetic code.”

The new bacteria replicated over a billion times, producing copies that contained and were controlled by the constructed, synthetic DNA.

“This is the first time any synthetic DNA has been in complete control of a cell,” said Dr. Venter.

This is not 100% “artificial” life nor is it really a new life form. But these scientists may be on their way to developing just that in the future – or at least trying to.

What would be the purpose of developing synthetic organisms? As far as Dr. Venter is concerned

“We decided that [by] writing new biological software and creating new species, we could create new species to do what we want them to do, not what they evolved to do”

Venter is one of the founders of Synthetic Genomics (SGI) which is dedicated to “creating genomic-driven commercial solutions to revolutionize many industries.” Their main focus right now is on energy, reversing environmental damage by “capturing” carbon dioxide (though, some groups are concerned that synthetic bacteria could actually be hazardous to the environment) and developing useful fuels. But Dr. Venter and his colleagues are also interested in developing synthetically derived vaccines to prevent human disease.

“It’s a great scientific discovery. Now we have to understand how it will be implemented in the future…

“If we ascertain that it is for the good of all, of the environment and man in it, we’ll keep the same judgment,” he said. “If, on the other hand, the use of this discovery should turn against the dignity of and respect for human life, then our judgment would change.”

Something tells me our Pope, who has been very outspoken on bioethical issues during his pontificate, will make sure Vatican bioethicists keep a close eye on the progression of this technology and render judgments accordingly. As new science develops, especially in the area of life sciences, it is important to consider, not just how safe and effective it might be, but the moral and ethical implications of every advancement as well (preferably before they become common practice). All good science must, as the Catechism suggests, be at the service of the human person, of his inalienable rights, of his true and integral good, in conformity with the plan and the will of God (2294).

I’m not quite sure what to make of this, myself. It does seem a little creepy. Synthetic DNA. Artificial life. What do you think? Is this perfectly fine (I mean, I suppose we’re not talking about using this technology to create or manipulate human life…yet) or does this take scientific experimentation a bit too far? Warned Bishop Domenico Mogavero, a member of the Italian bishops’ conference:

“Pretending to be God and parroting his power of creation is an enormous risk that can plunge men into a barbarity…(Scientists) should never forget that there is only one creator: God…In the wrong hands, today’s development can lead tomorrow to a devastating leap in the dark”

Indeed. As we’re seeing with IVF, ESCR and, now, cloning, the power of creation in the hands of scientists can have some pretty devastating consequences for the future of humanity.

One Comment on “Is Artificial Life in Our Future? Is it Ethical?”